Was there any specific reason behind delaying the meeting of Jon Snow and Bran Stark?

We have seen that, upon arriving at the Wall, Bran and Meera are greeted by the men of the Night's Watch in S07E01, and Jon Snow left for the Dragon Stone toward the end of S07E02.

So was there any specific reason behind delaying this meet?

The show, due to time-constraints, has progressively taken more and more liberties with how fast time goes by for the characters.

Here one of the writers on the show explains why: 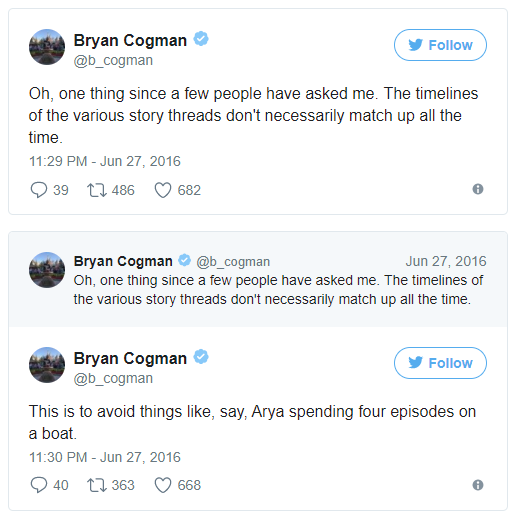 This phenomenon seems to have cropped up more and more as the show stopped being able to base its writing on the source material (Song of Ice and Fire book series).

Bran Stark's arrival in Castle Black in S07E01, only to arrive in Winterfell in S07E03 seems reasonable by some standards. Don't forget that it took Jon Snow 3 episodes to travel from Winterfell to Castle Black in Season 1 (he arrives there in S01E04).

Jon Snow leaving and travelling half a continent by boat in half an episode is just an example of the aforementioned out-of-sync time compressions for each character.

There might be a plot reason, but it's too early to tell.

Bran mentioned to Sansa that he needs to speak to Jon about something. Given the revelations in season 6, this is likely to be about Jon's parentage.

For plot reasons, it might be important that Jon gets to meet Daenerys before he learns of his ancestry. Depending on what HBO is going for, they might wait for the two to become allies, rivals, lovers or enemies before the reveal throws a spanner into said relationship.

8
Is a graphical representation of Season 7's timeline available?

9
Reason and timing of specific characters death in s05e10?
6
What is the significance of the direwolf deaths? Is there a hidden meaning?
7
Can Lyanna Mormont ask Jon to return Longclaw to House Mormont?
5
Can Bran Stark see the past from any weirwood tree?
16
Why does this happen with Longclaw?
12
What are Cersei's intentions throughout this interaction?
24
Why did Ned Stark keep this secret about Jon Snow from Catelyn Stark
5
Why did the Lord of Winterfell execute the deserter of the Night's Watch