Why was Vincent alone in Butch's apartment?

In Pulp Fiction, when Butch went back to his apartment to pick up his watch, he found Vincent Vega there alone. Why was no one else there with Vincent?

Not Jules, because he had already quit, but someone else. Did they assume that Butch is that stupid that he will not expect anyone waiting for him?

He didn't go alone...he went with Marsellus but Marsellus left to get coffee while they waited.

Meanwhile Butch has since betrayed Marsellus, who vows to kill him. While Marsellus and Vincent are staking out Butch's apartment, Marsellus leaves to get them some coffee and Vincent goes into the bathroom. Butch warily walks in to retrieve a forgotten watch and finds a Silenced MAC-11 on the kitchen counter. As he picks it up, Butch hears the toilet flush in the bathroom. Vincent walks out and freezes, recognizing Butch and staring into the barrel of his boss' gun.

When Butch leaves he sees Marsellus coming back from getting the coffee... 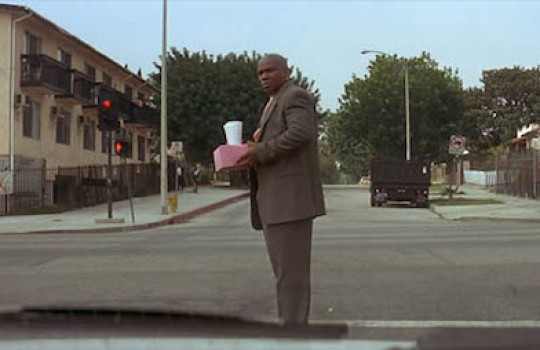 Certainly you could argue that they should not have split up but stakeouts (at least in movies) often involve one person being alone for a short time.

Not the answer you're looking for? Browse other questions tagged plot-explanation pulp-fiction .

31
Did Vincent Vega shoot Marvin on purpose?
13
Why did Jules have to give Ringo $1,500?
18
What is the symbolism of the gold watch?
6
Why was Butch's taxi ride background black and white?
13
When Butch walks back to his apartment, what is the radio in the background saying about Jackrabbit Slim's?
30
What is the meaning behind the "all shapes and sizes" dialogue in Pulp Fiction?
11
Was the radio announcement an innuendo that Vincent would be at Butch's apartment?
10
Why didn't Vincent and Jules use silencers in Pulp Fiction?
6
Why wasn't Vincent more furtive in the bathroom?
26
Why don't Jules & Vincent immediately kill everyone in the apartment except Marvin?