I remember only some bits of it, but I'm quite certain of these things:

It starts out with a family going by car in wintertime (probably around Christmas), on a road in or close to a forest. The main character, a girl, is sitting in the back of the station wagon car. She's sitting on a sled of some sort. I think she has dark/black hair. Maybe around 12-14 years old.

Suddenly there's a bump or something on the road, and the back door of the car opens. The girl on the sled is thrown out and is within seconds hurtling through the snow-covered forest on the sled.

She hits a tree.

When she wakes up she is in a fairytale-like land.

I remember some bits of the land, like for instance someone living in a house that looks like a bowling ball(?). I remember them sticking their heads out of the holes.

I think the movie then has our main character experiencing a mish-mash of fairytale-like situations.

Then in the end of the movie she wakes up as it was all obviously a dream and the people/family come to her and help her.

I've gone through endless lists of non-animated fairytale-ish movies on the web, but for some reason this movie doesn't show up anywhere.

Maybe it was a dream I had?

I cannot find out how she goes to Toyland in this movies (If she actually hits her head), but is it by any chance Babes in Toyland (1986)?

Its a movie about an 11 year-old girl (Drew Barrymore) who is transported into this fantasy world during Christmas Eve where she has to fight against Barnaby (the villain).

Lisa Piper (Drew Barrymore), an eleven-year-old girl from Cincinnati, Ohio, takes care of her siblings and cooks for her family. She has no time for toys, and refuses to be treated as a child. During a blizzard on Christmas Eve, Lisa is transported to Toyland.

And in the end:

Lisa is taken home by the Toymaster - who is revealed to be Santa Claus - in a sleigh with wooden reindeer. They travel across the Milky Way until she wakes up at home, as though it had all been a dream. 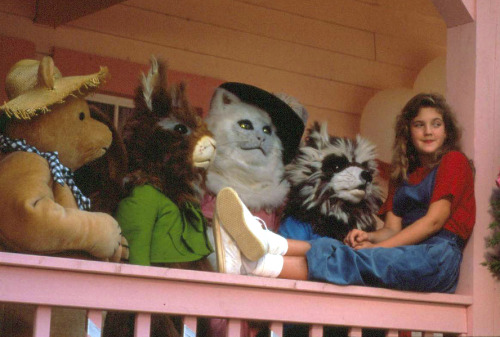