Why is there censorship in Parks and Recreation?

For a show I would consider more adult audience appropriate I find it strange they censure images, paraphernalia and language.

Is this for dramatisation or is this censorship just to make it more PG friendly?

For example a painting that was used in an episode had pixelization. 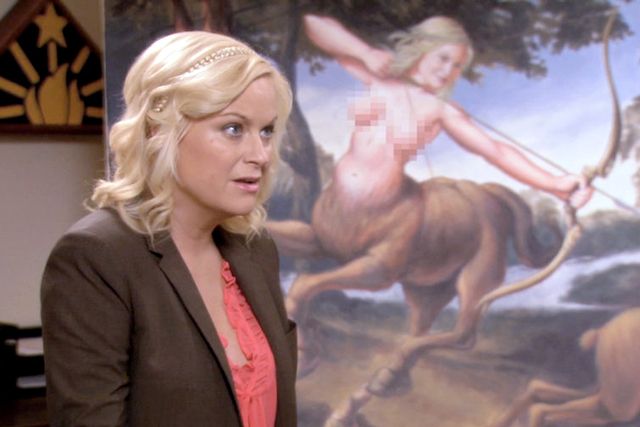 Parks and Recreation is an NBC production. NBC is one of the big three American broadcasting companies. ABC, NBC, and CBS produce television shows to air on their networks, which are geared towards being aired for "free"... broadcast over the airwaves to be picked up by televisions that still use antenna-based receivers (digital now, but still...).

This means that the shows produced by NBC to be aired by NBC on all their affiliate stations across the United States, have to abide by current censorship rules. One big issue in the censorship game on American Television... is nudity.

After Justin Timberlake exposed Janet Jackson's breast during a live performance at the 2004 Super Bowl halftime show, a moral panic occurred, and the Federal Communications Commission (FCC) tightened its indecency rules due to public pressure.

So. Why are boobs censored out of an NBC produced television show? Because the FCC says that you have to censor them. Why are they there in the first place? Because even censored, you know what they are. The biggest reason for censoring them? Because they are probably not even "nude". A common enough technique is to have an actor or image almost nude, and then just pixelate where their private parts would be, to imply that the character is nude. In reality, the actor might just be wearing a flesh colored thong, or bikini, or underwear. When pixelated, the viewer can't tell and only assumes the character is nude.

Am I saying that the painting behind her isn't actually showing a nude female torso? Nope. I'm just saying that it doesn't matter if it actually is a nude torso. All that matters is that we think it is nude, because of the censorship. Again... why the censorship? That's how the FCC says it has to be.

The show was filmed as if it were a documentary about the government, specifically following the Parks and Recreation team. This is why there are a lot of times where the cast look directly at the camera, to remind us that this is supposed to be us watching them through a camera crew.

With that said, in regards to the censorship, things happen in life, unexpected things. Sometimes, without warning, there's someone walking naked down the street for no apparent reason. When documentaries are filmed, those filming intend to capture everything they can to capture the realness of the situation, whether it's believable that it would happen unscripted or not.

By incorporating adult themes into the show, and censoring them, the show is achieving a couple of things. First, it adds a comedic level, because it's funny to see random things censored on screen when, as an adult, you know it's silly for that particular thing to be censored. Second, it alludes to the fact that this documentary is being shown on some cable channel, making the documentary part of it go a little deeper and allows you to get drawn in a little bit more and invest in the characters.

In short, the censorship parts weren't accidental, they were added to add a comedic level and to add some realism to the show.

Not the answer you're looking for? Browse other questions tagged parks-and-recreation .

7
What were the Halloween costumes that Leslie and Ann used in Parks & Rec episode 'Halloween Surprise'?
8
Why does Ron Swanson work at the Parks Department?
3
Why does Leslie Knope love Joe Biden?
10
Is there any connection between Liz and Ron’s office food pictures?
8
Who is filming the Pawnee Parks and Recreation department?