How do they film someone submerged in water for prolonged periods of time and the character does not drown (as in the actor themselves)?

In some movies, you see that there is a character who is sinking towards the bottom of the ocean or pool or whatever, they are there for prolonged periods of time with their mouths open and they are under for quite some time (longer than 3 minutes).

Though I can't remember the name of the movie that I saw it from (as that doesn't matter) I have the scene clear in my head (a woman is hovering in an ocean with her mouth wide open and they film her being there for quite some time with relaxing music being played and a close up scene to her body from the side of her body.).

How do they film this without the character (actor) actually drowning?

Actors have in the past stated that they were able to perform without any breathing apparatus, but most of this is probably hyperbolic and in most cases can be attributed to clever editing.

In filming the extended underwater sequence of Mission Impossible Rogue Nation, Tom Cruise has claimed he held his breath for up to 5 minutes.

Cruise, who reportedly trained to hold his breath for six and a half minutes underwater in Mission: Impossible — Rogue Nation, shared the process of filming the extreme stunt. “You get rid of the regulator, get rid of the bubbles, get on the side and we wanted to do it one shot, so they were very, very long shots,” said Cruise. “I’d have to hold it consistently, you know safely, up to four minutes almost for every take.”

Despite hours of training and even learning to slow his heart rate down, Cruise explained performing the actual stunt was “not pleasant.” “I trained for a long time to the point that when I finished the sequence, there’d be times I’d be sitting there talking in meetings and I wouldn’t breathe,” he said. “I realized I am not breathing and I had to turn my autonomic system back on to breathe again.”

However, even if this is true it should absolutely be treated as the exception, and most film makers will simply be creative in how they choose to film and how they edit. Different film makers will use different techniques, which are in turn dependent on variables.

Almost all underwater shots are done in 'a tank', as opposed to out in actual open water. Not only is this less cost prohibitive, but it also allows the film maker control over consistency of conditons: lighting chief among them. This is often also the case when shooting with water at all, infact. 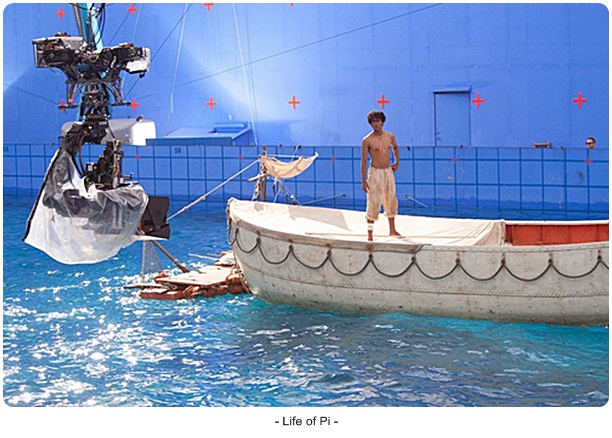 Tanks are typically useful for creating the deception of the actor being deeper underwater than they actually are, but when an actor needs to go deeper and cannot surface for air, a diving team is typically used.

The following scenes are from the production diary of Atonement. The shot below of Keira Knightley sees her submerged only a few feet underwater, but in order for her not to constantly have to reset her position she was given a diving team (just out of shot, to the left): 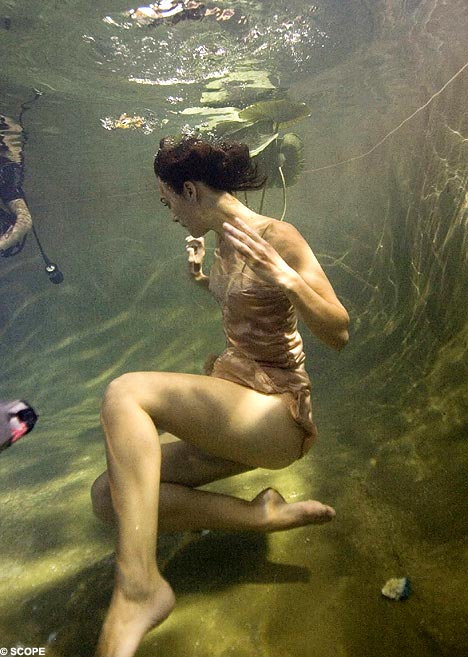 In this shot, she is being provided with oxygen between takes. It is much easier for the diving time to get out of frame than for Keira to surface, gulp air, dive and get back in position for another shot. 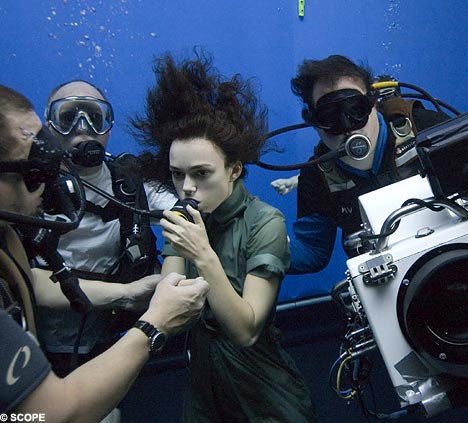 When using tanks, greenscreens/bluescreens and Chroma Key are used to modify the background in post production. 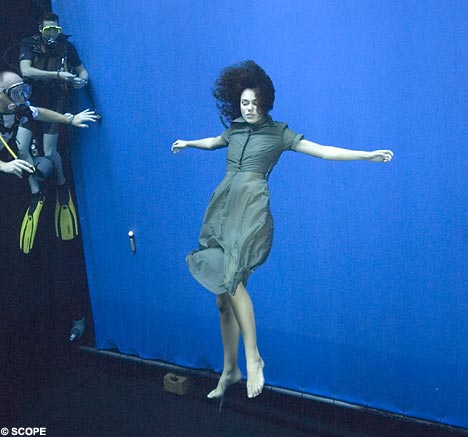 22
How do they show a tooth-less mouth?
11
Camera shot with close-up next to farther away standing person
19
Why the very different release formats for Hitchhiker's Guide to the Galaxy?
13
What are the methods of including a character's thoughts in an audiovisual medium?
62
Why do mouse cursors never align with actors' hand movements (or always move perfectly straight)?
35
How do they film someone being stabbed with a weapon that goes all the way through?
10
How do they film continuous blood pooling?