What is the Dowager Countess of Grantham's source of money?

Violet Crawley, the Dowager Countess of Grantham, in the series Downton Abbey lives comfortably in a house nearby the main house. She is a widow. Violet has some money beyond the upkeep of her house, as at one point she sends money for relatives to attend a wedding. In season 3,

Does Violet have an eternal fortune from the family, or does she live off a stipend from Lord Grantham's estate?

At one point Lady Cora's mother says “Both of our husbands tied the money up tight before they were taken” to Violet. Does this hint at Violet having money that can't be accessed, or is she just talking about how the money is tied to the estate? 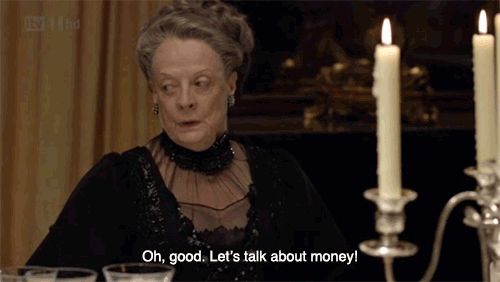 There's no evidence that I can find that Violet Crawley has any income other than from the Downton Abbey estate presumably by way of a stipend from Robert.

While she was born into the aristocracy, her family was relatively impoverished and she brought almost no money with her upon marriage. When she married the Earl of Grantham sometime before 1860, she brought her upper class blood but little money into her marriage.

It's possible that she may have money saved or invested from previous stipend payments but given the culture of the time it's unlikely that Violet would talk about money unless she had to.

The Downtown Abbey estate is entailed which means that...

Unfortunately, the Earl does not own the estate outright. It is entailed. An entail was a legal device to ensure that property would be handed down in a way that suited the ancestor, normally to a male heir, thus keeping the family estate intact.

In the entail system, the property owner, The Earl’s father, does not pass it in fee simple to the son. The Earl has a life estate, meaning he has the full use of the property during his life and, at the end of his life, it will pass to his son or to someone else in the family- often the closest male heir.

Death duties / taxes of the time were vicious to the landed gentry and tying up the money in trusts and other legal procedures would have been the norm.

This may be what Martha Levison is referring to as "tying the money up tight".

Not the answer you're looking for? Browse other questions tagged downton-abbey .

11
What kind of tree is the giant tree in Downton Abbey?
11
How did the prosecution know what Bates said?
11
Do the maids' apron designs indicate position?
3
What does the carnie say?
4
Was Thomas' hand injury in the trenches impulsive or premeditated?
2
What was Mary's operation?
1
Why is the shopkeeper so rude?
3
What exactly is Lady Mary's “device” in Season 5 of Downton Abbey?
0
Meaning of 'Does it ever get cold on the moral high ground?'
5
How much of Downton Abbey (TV) should you watch to prepare for the movie?