Why did Nymeria leave Arya?

Near the end of Game of Thrones S07E02, Arya was surrounded by wolves and Nymeria was amongst one of them. I (and most of the GoT fans) thought Nymeria is going to reunite with Arya finally, however Nymeria walked away and left Arya.

So why did Nymeria do that?

This is discussed in the after-episode conversation with the writers. They are showing that Arya and Nymeria (like most of the Starks and their Direwolves) share personality traits.

They reference back when Arya is talking with her dad about being a "exemplary woman" and she says "That's not me". When she meets Nymeria again, she realizes that, as much as Arya has made a new place for herself, so to has Nymeria. She is no longer Arya's pet. She is her own wolf and has found her own life. This is why Arya says "That's not you" - she realizes that her connection with Nymeria is gone and she needs to move on.

It's discussed in The Independent here. Not sure if the video is generally available outside of HBO.

During a post-episode discussion, showrunners David Benioff and D.B. Weiss explained how the phrase was a callback to season one. One early episode sees Ned Stark tell his daughter that she will one day be a lady and get married, to which she replies: “No. That’s not me.”

Benioff describes how Arya wants Nymeria “to come back home with her and be her loyal companion again. But Nymeria’s found her own life.”

The video is here:

Bryan Cogman, who is the show's main scriptwriter (including the writer of that particular episode) and also co-executive producer recently said on Twitter:

...She [Nymeria] doesn't go with her [Arya] because too much time has passed and she isn't a pet anymore. She's got her own thing now. 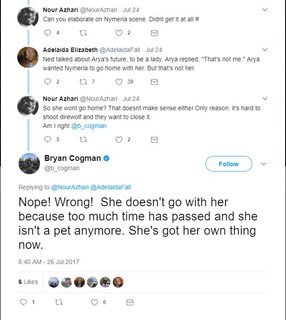 Arya wants Nymeria “to come back home with her and be her loyal companion again. But Nymeria’s found her own life.” That’s not you’ is a direct reference to what Arya herself said to her father when her father painted this picture for her as a lady of a castle and marrying some lord and wearing some frilly dress. Arya’s not domesticated and it makes total sense her wolf wouldn’t be either. Once the wolf walks away, at first she’s heartbroken to have come this close. Then she realises the wolf is doing exactly what she would do if she were that wolf.”

23
Why did Sandor 'The Hound' Clegane abandon King's Landing in the middle of battle?
36
Why did Arya refuse to end it?
33
Why wasn't Arya left at the Eyrie?
51
Why can Arya still use the faces?
18
Why did Yoren help Arya Stark?
16
Were Sansa and Arya aware of Littlefinger’s deceptive plan all along?
3
Did the Hound know his role?
4
Why did this woman want Arya to have this object?
32
How come Arya Stark wasn't hurt by this in Game of Thrones Season 8 Episode 5?
1
What happend to Nymeria?