What is the purpose of the chains hanging from the shelves at the Citadel?

Since the Citadel gets decent screen time the first two episodes this season I happened to notice and wonder about the chains tangling from certain book shelves.

What is the purpose of those chains?

I came across an explanation here, that says that similar chains served as some ancient version of an anti-theft device. But there are some points that leave me thinking: 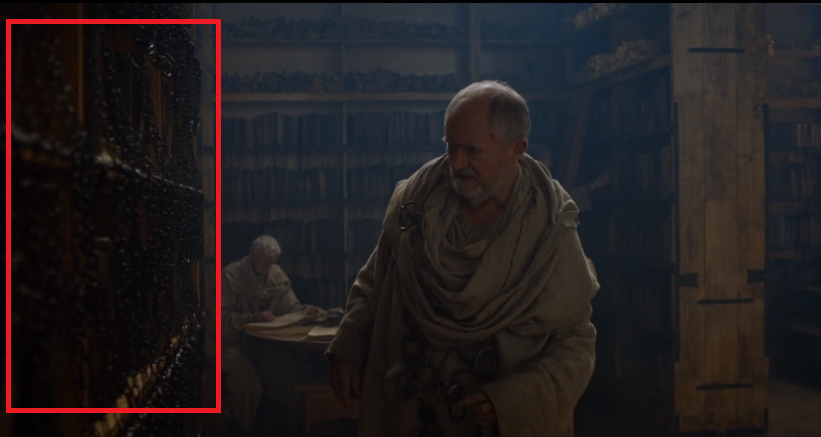 I learned about this when I went to The Bodleian Library, Oxford. The library was used in Harry Potter movies and it had chained books. The explanation is that: 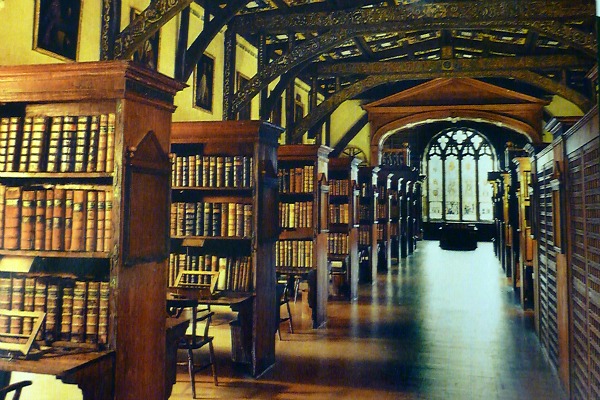 A chained library is a library where the books are attached to their bookcase by a chain, which is sufficiently long to allow the books to be taken from their shelves and read, but not removed from the library itself. This would prevent theft of the library's materials.The practice was usual for reference libraries (that is, the vast majority of libraries) from the Middle Ages to approximately the 18th century. However, since the chaining process was also expensive, it was not used on all books.Only the more valuable books in a collection were chained. This included reference books and large books.source

It doesn't matter that The Citadel Library is a private library, books could be stonlen anyway, as a matter of fact Sam is sneaking away some of them.

This is an example of a "chained library". These originated in the Middle Ages, which is the time period Game of Thrones is inspired by or patterned off of. The purpose was to keep books from being stolen and was typically only done on more valuable books.

A chained library is a library where the books are attached to their bookcase by a chain, which is sufficiently long to allow the books to be taken from their shelves and read, but not removed from the library itself. This would prevent theft of the library's materials. However, it also led to crowding and awkwardness when readers had to stand side by side, each holding a book or clumping so they could share one. The practice was usual for reference libraries (that is, the vast majority of libraries) from the Middle Ages to approximately the 18th century. However, since the chaining process was also expensive, it was not used on all books. Only the more valuable books in a collection were chained. This included reference books and large books.

The answer about "Chained Libraries" is probably the best answer and that it was ultimately just an aesthetic choice to show parallels with our own history, since it doesn't appear there are books attached to chains.

But as an aesthetic choice one can argue that it plays with themes. Game of Thrones is a cycle cosmology story, meaning the reason the metaphysical aspects are happening, including the White Walkers coming for the living, is in part a metaphor for people having to "deal" with the indiscretions of past generations (the sins of the father = karma). It's why Martin went to great length to write "histories" and that 'songs and seasons' are additional motifs to solidify this idea, as knowledge is power and power is an opportunity to control and/or gain freedom or liberation.

"I will not stop the wheel. I will BREAK the wheel." - Daenarys Targeryen

On Dany's side of the story, the idea of freeing people (one of her monikers is the "Breaker of Chains") is obvious in her over all role, but it's that her purpose is essentially pointed in the wrong direction with Essos plots being a microcosm of the macrocosm, as it is really the freedom to live (and hopefully live better by abolishing a monarchy government) that is the purpose of our story, as defeating the White Walkers once and for all, is how the cycle will "break" into a new (ie: The Law of Averages). So the Library itself is another kind of display of this idea.

However, there could be other historic significance to the Library having chains. Oldstown and certain parts of the Citadel have other histories, including that Pirate Lord once claimed a portion of it home and picked off ships when they came in. And although it is disputed, there once was a king also whom may have built the towers and had an assortment of magical persons people come to his service.So it's categorically possible that Library was once something else and the chains belonged to it, more than library.

Note: White Walkers had chains to get Viserion's body out of the water was also a physical feature in the season.

A logistical reason could be to some how secure the chain to avoid books from falling during quakes. Also it appears to me that book’s could were storage horizontally.