What is this movie where a father convinces his son that the concentration camp they are in is all just a game? [closed]

I remember watching a very interesting movie, in Italian language class, back in high school.

The movie starred a famous Italian comedian, as the father in a Jewish family, during the times of nazi Germany. There is a wife, and a little boy. The family is taken to a concentration camp, and the father and son are split up from the mother.

The father makes believe that they are on a game show, in order to save his son from the fear of reality. He makes out that all of the strict rules and treatments are all part of the game show, and whoever wins gets a tank. The boy believes him right up until the end of the movie.

I remember one scene in the female camp, where the mother is being told that her son is dead by one of the other prisoners. As it happens, the father hid the boy when the soldiers came to take the children away. The father and son manage to sneak into a radio room and broadcast a message out to the mother, and she is able to hear that her son is alive.

I believe the son witnesses the tank, as the men are all forced to work in tank production. The father tells him "where do you think they are getting the tank from, to give to the winner", and this excites the boy.

At the end, the prisoners are set free / escape, as Germany is invaded. The father is separated from the son, and runs into a group of Germans. They promptly walk him around the corner, off camera, and it is implied that he is shot dead. The son is drawn to a tank that is being driven through the camp, still thinking they are playing a game. The tank door opens to reveal an ally, who promptly rescues the child. The movie ends with a monologue from the child, now presumably older and aware of his fathers sacrifice. I can not remember what happens to the mother, but I think it was implied that she was never reunited with her son.

I watched this movie in 2004, approximately, but I believe the movie was fairly older. I can not remember if it was in colour or black and white, but I believe it had won a few awards, internationally.

This is the summary from IMDB:

When an open-minded Jewish librarian and his son become victims of the Holocaust, he uses a perfect mixture of will, humor and imagination to protect his son from the dangers around their camp.

The main character, Guido, is an Jewish Italian book-keeper that is really good at getting away from trouble due to his imagination and character. And when he is sent to a concentration camp with his wife and son, he decides that he is going to do everything in his hand to preserve the innocence of his kid.

The "mixture of will, humor, and imagination" from the summary is seen all over the movie, while he goes through many "adventures" to convince his son that it's all a game and that the prize in the end is a real-life tank (as you explained in the question). 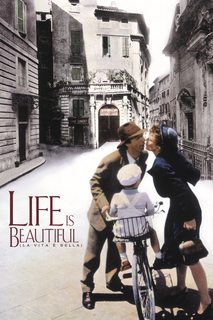