What does the color Red symbolize in "The Sixth Sense"?

The color Red appears as a motif in M. Night Shyamalan's magnum opus The Sixth Sense, often noticeably too, in shots where red color juxtaposes with the surroundings.

Here are some notable examples:

1 Cole wears a red sweater at a birthday party. Notice how the color of the wall is somewhat dull and pale, forming a sharp contrast. 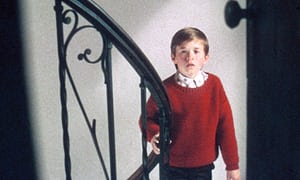 2 The red balloon floats to the top of the spiral stairs. Note that there were ghosts at the top, and the balloon was a device to add to the ominous factor. 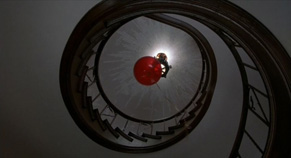 3 The ominous red door knob, which was an important plot device for the epic reveal we see at the end. 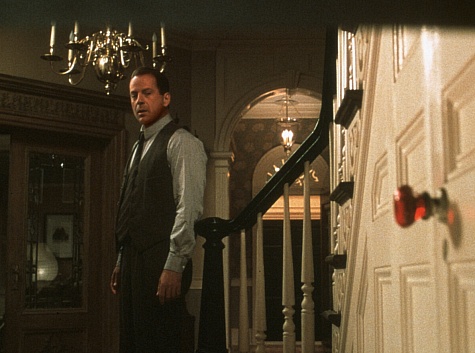 4 The little girl's mother/ killer is the only one to wear a vibrant Red. 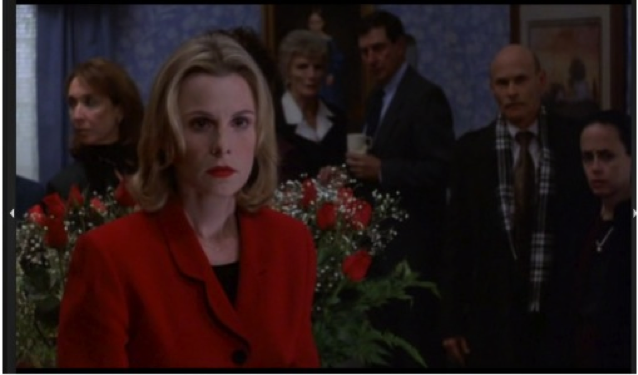 Some other mentions include the huge Red doors of Cole's house, as well as the red tent he hides out in.

These occurrences of Red were too noticeable for me, especially since the vibrant Red was deliberately put in somewhat paler surroundings. This had to be intentional from the director's part.

So what did Red symbolize? And what meaning were they supposed to convey for the audience?

Wikipedia explains this with notes and citations from the Director and a Producer from the DVD commentary/bonus features.

The color red is intentionally absent from most of the film, but it is used prominently in a few isolated shots for "anything in the real world that has been tainted by the other world"[4] and "to connote really explosively emotional moments and situations"[5]

Examples include the door of the church where Cole seeks sanctuary; the balloon, carpet, and Cole's sweater at the birthday party; the tent in which he first encounters Kyra; the volume numbers on Crowe's tape recorder; the doorknob on the locked basement door where Malcolm's office is located; the shirt that Anna wears at the restaurant; Kyra's mother's dress at the wake; and the shawl wrapped around the sleeping Anna.