I'm looking for an old movie, most likely American, from the 80s or 90s, but I don't know nor the title, nor the director, nor any of the actors in it.

It is a story about some woman who kills her own daughter so she can go directly to heaven before she has the chance to get corrupted or make a sin. But later, she deeply regrets this deed and punishes herself by doing 'sins' so she can certainly go to hell after her death, obviously, by what I saw in the trailer, by tattooing herself and having sex!

There was a scene of her from her back while riding her partner, revealing her fully colour tattooed back in full view.

So, does any of this sounds familiar to anyone?

Sharon, a young Los Angeles woman, engages in a swinging, libidinous lifestyle. She comes into contact with a sect that advises her that the Rapture is imminent.

In time, she comes to accept this belief herself and becomes a born-again Christian. She begins a new, pious lifestyle, eventually marrying and having a daughter, Mary. When her husband Randy is killed in a senseless murder, however, she begins to question the benevolence of God. She believes God has called her to go to the desert to wait for the Rapture, and instead of leaving her daughter safely with friends decides Mary must come with her. A police officer named Foster is concerned for their well-being after they are reduced to stealing food while they wait, but Sharon is insistent that the end is near.

After a period of time Sharon begins to despair and at her daughter's urging, decides to hasten their ascendance to heaven. She kills Mary with a gunshot but is unable to take her own life afterwards, afraid she'll be condemned as a suicide. She confesses to what she had done to Foster and is arrested and placed in the local jail.

After an apparition of Mary (accompanied by two angels) in the night, the Rapture occurs. While Sharon sits in her cell early the next morning, a loud trumpet blast is heard all over the world, signaling the start of the Rapture. Later on, Sharon and Foster, after driving out into the desert, are both raptured to a purgatory-like landscape. Foster, who had been an atheist his whole life, accepts God and is allowed entrance to Heaven, but Sharon blames God for Mary's death, even though God didn't tell her to bring Mary with her to the desert, and she cannot renounce her anger at what she sees as His cruelty. Mary pleads with her to accept God back into her heart so she can join her and Randy in Heaven, but Sharon refuses, choosing to remain alone in the purgatory-like landscape for eternity.

Here is a still from the sex scene you mentioned, in which we can see the tattoos on her back that you also mentioned: 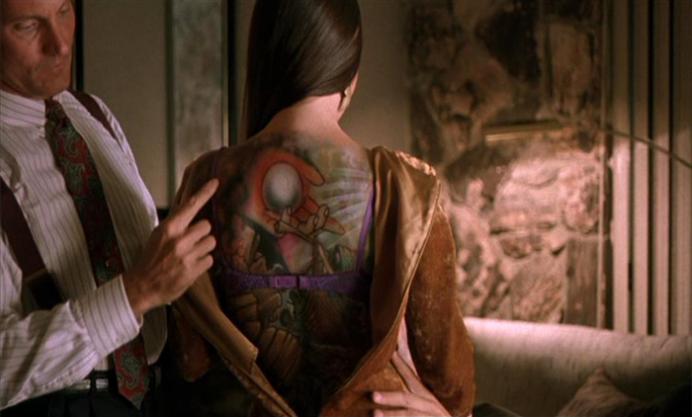 Not the answer you're looking for? Browse other questions tagged identify-this-movie thriller drama .