How did so many helicopters fit on deck?

In the starting scene of the movie Kong Skull Island we can see a whole bunch of helicopters being deployed off the deck of a freighter. As I count there are: 9x UH-1 Iroquois (main deck), 1x CH-47 Chinook (front deck), and 1x CH-53 Sea Stallion (rear deck).

plus supposedly 3 more UH-1s for the final rendezvous (These don't seem like a problem as a later scene shows them parked in the rear hanger). Those 9 are supposed to fit on the main deck and they probably would if it was for storage. But considering the space needed for the blades to rotate when they are turned on, is it really practical?

Now its obvious they had to take turns to take off, but if the deck is completely occupied at first that won't also work. The model of the ship and its specs could also she some light on the situation.

Possibly lined up, with their rotors folded

The video below shows multiple helicopters landing on an aircraft carrier:

At the start of the video we can see on the right that some helicopters are waiting, with their rotors folded, in a similar way to this: 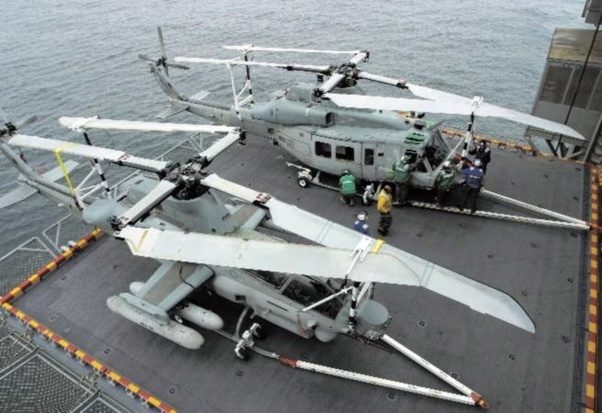 It is possible that this method was used by the crew to store multiple helicopters during the voyage.

Providing enough space is left to allow one to take off, the others could then be moved into position one at a time, and have ample room to take off.

Not the answer you're looking for? Browse other questions tagged kong-skull-island monsterverse .

4
How big is Godzilla in the new film?
2
Were those real helicopters in Kong Skull island?
5
How much time was between Godzilla's appearances in Honolulu and San Francisco?