Why is the spoken German in many US films and TV shows so inaccurate?

Is there a reason why in so many English-language movies and TV series, whenever someone is speaking "German", they (actors, writers etc.) just don't care about if what they say is right or wrong? This can range from:

I don't know if this is the same with other languages (for example there is a scene in Scrubs where the cast speaks Spanish, but there might be similar mistakes:

Do the creators and actors just not want to speak correct German and at least use correct German words, or is there simply no money in a $100,000,000 movie production to ask a native speaker to look over your script and maybe correct some of the lines?

As a software developer and general IT nerd, I am constantly faced with this principle. Many, many TV shows and movies forgo showing a correct approach, and opted for the most minimally correct display of IT, because they assume it's a pointless detail.

I see it happen more with IT than German (as I don't speak German), but the principle is the same: being factually correct was deemed to much of an irrelevant detail, and no one wanted to put in the effort to research the correct thing to say.

Even if the script contained correct German, and the actor mistakenly messes up the grammar, it's still possible that no one catches it.

If the movie is recorded in the USA with an American crew, none of them having any German speaking skill, then no one will notice that the actor said it wrongly.

Secondly, in the case of more than just a single line of foreign language, actors often go to special trainers to teach them how to sound like a true German, even if only for a few lines.

Because of this, most of the people working on set will not correct the actor; since they know he has been trained to speak German and they know little or nothing about it. By comparison, they feel inadequate to highlight the (trained) actor's mistake.

Because it's a joke

You've mentioned How I Met Your Mother twice. In both cases, the butchering of the German language is intentional.

There are a few potential reasons for this:

It's worth noting that this phenomenon isn't unique to English-language works, either. Anime in particular is infamous for its terrible English (partly for budgetary reasons, partly due to linguistic differences). My personal favourite is Kiniro Mosaic, in which two of the main characters were born and raised in England and one of them is pure-blooded English, yet neither of them sounds even remotely English when they speak:

It's not just German. Pretty much every "foreign" language suffers the same fate in Hollywood movies.

(Exception: Spanish, because a large minority of Americans actually understand a little bit of Spanish. Indeed some are even native Spanish speakers.)

Consider for example Captain Fantastic (2016) which had pretensions of being an intelligent film and where everyone in the family depicted was super-intelligent and capable:

But unfortunately, there was this scene where they started speaking in a variety of "foreign" languages. The purpose of this scene was to impress the viewer with yet another one of this remarkable family's amazing talents.

But unfortunately the "foreign" languages were spoken horribly and it was obvious they had just been lines memorized from a script. So if you actually understand any of these "foreign" languages, this is one part of the movie that kinda falls apart and undermines the whole "super-intelligent hippie family" premise of the movie.

The Mandarin was particularly and comically awful. (On my first viewing, I could vaguely tell that Mandarin was probably being spoken. It was only when I was writing this answer and watched this clip several more times that I could make out what exactly the guy was saying.)

(And would a German speaker please also let me know if "Ich können Deutsch sprechen" is even grammatically correct? @TaW: "No it isn't. Correct: Ich kann Deutsch (sprechen)".)

(Some have argued in the comments below that in Captain Fantastic, "foreign" languages happened to be the family's one and only blemish among their multitude of amazing talents. But I favor a simpler explanation: the director, writers, and actors simply didn't bother getting this right or didn't know how to.)

I think though that nowadays for blockbuster Hollywood movies directed at a global audience, they do make more of an effort. (These days, for blockbuster movies, the US box office revenue is usually less than the outside-US revenue.) So for example Arrival which featured a somewhat prominent role for Chinese characters actually bothered making an effort. Indeed they even spent some good money inventing the alien language. (Though in the brief scene where Amy Adams was speaking Mandarin, it wasn't very good, which was inconsistent with her being a polyglot linguist who could speak Mandarin.)

But Captain Fantastic and older movies like Die Hard were definitely targeted only at an American audience.

All of those shows you listed were created in the USA for America by Americans. Given that, you have to realize that very, very few Americans know German.

I'm talking less than half a percent of the country (< 0.5%) . Even worse, a large number of those speakers are Amish or Mennonites, who are not very likely to go buy a ticket to a Die Hard movie.

To give you a bit of perspective, more Americans speak Tagalog and Vietnamese than speak German. The language is just not that important in the USA. 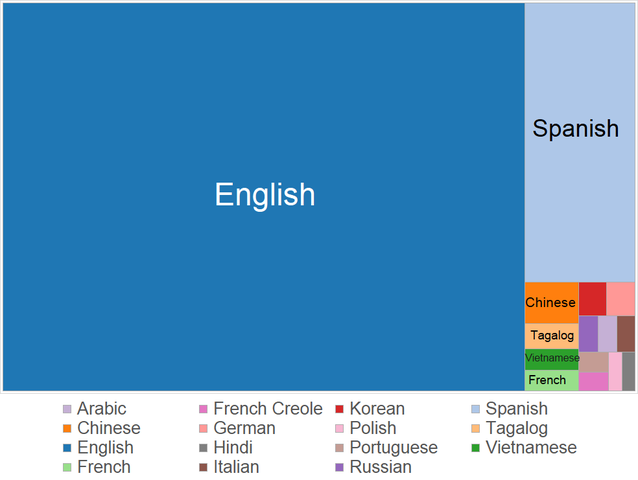 This is too long for a comment (other answers are more comprehensive), but for the HIMYM instance, this is not so much mocking German as it is mashing up English as German for comedic effetc. There is a long tradition of this because English so easily "transforms" into Germanish with a few simply tricks. I think this is quite different from the throw-away lines in the more serious contexts, especially in light of the reuse of the term as a gag.

Leben sounds like Lieben so obviously, this was chosen. Slangen is simply English slang. Schiksa is a disparaging "jewish" (Yiddish?) term, generally for a non-jewish woman and is often used winkingly as in "She's got shiksappeal". Shatz is a play on the past tense of shit (at least, informally it is). The exact spelling in the CC may be "wrong" in that often CC is by a transcriber and not from a script.

A standard example of this format of comedy can be seen in an old sign that ran the rounds in computer labs: (in blackletter, all caps) "ALLES TURISTEN UND NONTEKNISCHEN LOOKENPEEPERS! DAS KOMPUTERMASCHINE IST NICHT FÜR DER GEFINGERPOKEN [...]"

Die Hard, I would think, would probably spent a little money to get it right. It was headed for International release, so language would be important. However, you're talking about a Shakespearean actor of British descent with no experience in the language, so the fact that he missed a subtle nuance wouldn't be surprising. I mean, if it was that easy then everyone could be a spy.

I'd like to shadow something mentioned by Flater: this is the norm when dealing with IT. Go back and watch the Sandra Bullock vehicle, The Net. OMFG, they got just about everything wrong in that movie. But, who but the most hardcore of nerds would have known? I think TV shows probably operate under the same assumption about other languages; very few people would know. Well, with regards to Spanish they're probably getting more sensitive, but that's it.

This isn't just TV/movies; I'd hazard a bet that the German used in Frank Zappa's "Stick It Out" probably isn't very accurate either. And Zappa toured Europe all the time.

The correct native speech may lack this and therefore sound strange to the target audience.

Similar to the tech example where being factually correct sounds boring compared to stringing a few unrelated slightly recognisable buzz words together.

Even when the producers know that there is a mistake, and the mistake isn't serving the context, they permit mistakes to be made and to go uncorrected.

We are talking German here. That is a language no non-native speaker can hope to speak acceptably anyway, so you cannot expect the same care to detail as given to, say, Elvish or Klingon. Speakers of High Elvish understand Wood Elvish fine. Speakers of High German will not understand Low German speakers, and neither will be able to understand or speak Letzeburgisch or Yiddish. If you learn German in school, that's good for listening to news broadcasts intended for international audience ("Deutsche Welle"). And you'll be able to make yourself understandable in several parts of German (though in some getting addressed in High German is considered insulting, they are forgiving with foreigners and other less gifted people).

So why bother? You cannot win anyway.

Not the answer you're looking for? Browse other questions tagged dialogue translation .

4
Is there a reason behind the "wrong" German localizations of English movies/TV shows
-2
Bad accents of "foreign" characters in "native" dialogue
50
Why does Hollywood not use foreigners in foreigners' roles?
2
Why is Hunyak's Hungarian so absolutely atrocious?

7
In dubbed films, what language is spoken if the character says something in the dubbed language?
7
Why do the Russian and German characters not speak in their respective accents?
5
Why were the songs not translated/dubbed into German?
7
Why is John Malkovich in Deepwater Horizon omitting words?
5
Shooting films silently and adding the sound afterwards
1
Why does Wonka speak French and German?