How did Nick Fury lose his left eye?

Steve Rogers: Soldiers trust each other, that's what makes it an army. Not a bunch of guys running around and shooting guns.

Nick Fury: The last time I trusted someone, I lost an eye.

In the Marvel Cinematic Universe, is it ever explained how Nick Fury lost his eye?

Now that Captain Marvel is out, we finally know how Fury lost his left eye in the MCU.

He was playing with and petting Goose, the "cat" they found in the research facility, and Goose scratched his eye. The scars around his eye are also from Goose, who is actually a Flerken, an alien race.

No. It is not explained in the Marvel Cinematic Universe ever except the conversation you already mentioned. This may or may not be explained in future films, but it is pure speculation for now.

However, it is explained in the comic world.

In Earth-616, Nick Fury fought in World War II as part of the Howling Commandos. A grenade by Nazi soldier was thrown at him. Though he caught it, but delayed throwing it back. The shrapnel he was hit with was what caused the damage that would slowly deteriorate the vision in his left eye, eventually leaving him almost completely blind in that eye. 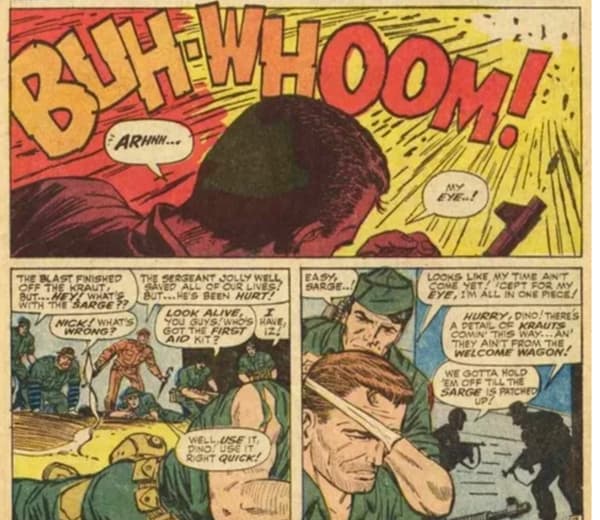 In the Ultimate Marvel Universe, his eye was injured due to a bombing he was caught in alongside James Howlett — a.k.a. Wolverine/Logan — during the Gulf War, but unlike his Earth-616 counterpart, he completely lost the eyeball and was left with bad scarring around the now empty socket.

4
How do Stan Lee's random appearances work in the Marvel Cinematic Universe?
11
Was Nick Fury treated with GH-325?
7
Why no Marvel One-Shot for The Winter Soldier?
31
When is Doctor Strange actually set?
26
Who are Nick Fury and Maria Hill working for?
11
Was Steve Rogers legally a "Captain" America?
5
Why did Fury lose his eye this way?
5
Why did they name the movie "Captain Marvel"?