In Season 3 episode 3, Jared tells and convinces the guys using Meinertzhagen's Haversack analogy to get their Skunkworks up and running in their Pied Piper office without Jack Barker noticing them.

However, when the guys reach office the next day and Richard trips over the pipe spilling his "Skunkwork" files all around. Was that deliberate? 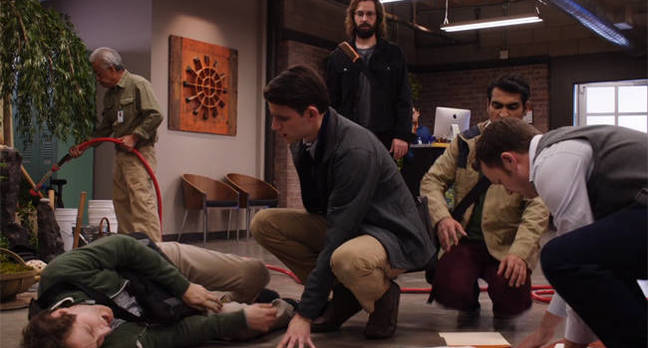 I wonder because that's what happened in the original Haversack case where the actual plan itself was to get the fake haversack caught.

But yet in the next episode we see no signs of any of the guys mentioning about it when their Haversack plan has succeeded.

No. It was not deliberate.

I think you misunderstood the analogy. It is explained in this question: What is Meinertzhagen's Haversack, theory that Jared from Silicon Valley tells?.

In this case, the Haversack is to keep pretending to work on Action Jack's box. So they have to keep complaining, to not be enthousiast on the box project.

By tripping and spreading his files, Richard reveals his actual plan. He reveals to the "Turks" that the Haversack content is fake. You will see the negative consequences of this accident in the following episodes, and undestand it was not planned at all.

5
What is Meinertzhagen's Haversack, theory that Jared from Silicon Valley tells?

7
Did James May, Richard Hammond and Jeremy Clarkson really find out the source of the river Nile in BBC TopGear?
9
At the beginning of Silicon Valley, were Richard Hendricks and Big Head working for Hooli?
7
How did Trip enter the alien city unaffected?
4
How did Richard Parker manage to get the goat inside the cage?
3
How did Richard and Erlich meet?
13
How did an event in Episode 8 of Westworld occur?
5
What is Meinertzhagen's Haversack, theory that Jared from Silicon Valley tells?
17
Why did Frank think that the waiter was Richard Pryor?
3
Why did they do this to Richard Poole on Death in Paradise?
4
Why did Chief Inspector Kido deliberately do this?