Does Maui really need his fishook to do magic?

Several timed Maui says he cannot do magic/have powers without the hook but in the scene where he leaves the tiny island in Moana's boat, he points at the sail and the wind gives it a burst of speed.

Was this a continuity error or was he pretending to be more powerless than he really was to motivate Moana?

I answered this on Science Fiction & Fantasy originally, but the content still applies to this question.

I think it's reasonable to assume that yes, Maui has magic without his hook.

Before analyzing the scene in the song, here's a few other examples of Maui displaying magic prior to regaining his hook:

He makes seeds from nowhere, in order to fatten up HeiHei.

Important to note here is that the seeds seem to simply appear in his hand in both cases. Supposing he has anywhere to hide them on his persons, we never see him reach for them. Instead, it seems to be one of his magical powers at play.

Secondly, we also see Mini Maui and his other tattoos animate, all throughout the film.

He also maintains immortality and durability (as seen in his fight against Tamatoa).

Finally, we see him "harness the breeze" during the song. You may consider it coincidence, which is why I add it last, here. But as he says he controls the breeze, he gestures, and a breeze blows through, clearly moving Moana's hair.

Together, I think this establish that Maui still has magical abilities without his hook. Let's look at the song now.

This part always stood out to me, the clear wonder on Moana's face as she looks at Maui's illusion:

She also appears to make eye contact with, or at least direct her vision at, the illusionary people, and at one point rides one of the trees into the air (notice here pose and the fall of her skirt, she couldn't be simply sitting on the ground and thinking she's moving). 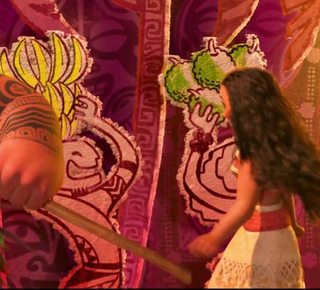 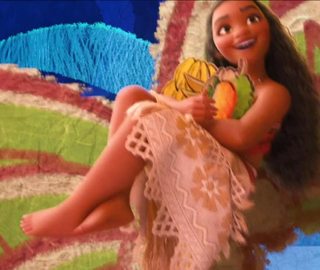 And, her line of sight when she first holds one of the illusionary fruit is actually higher than what it'd be if she were holding any of the single rocks. Notice how small they are individually (the size of her fist), and she's looking well above that. 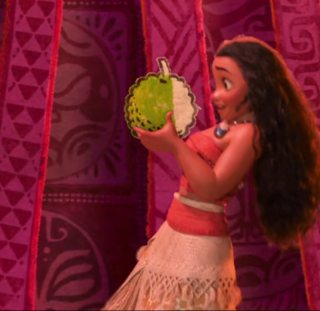 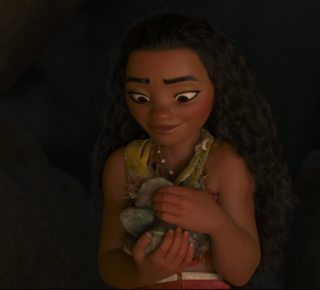 I think we have a pretty compelling argument here that, at least from Moana's perspective, she was seeing the illusion.

But, to round it off, we can use some of the dialogue from the movie to explain things.

Grandmother (narrating): A shape shifter who could change form. With the power of his magical fish hook.

Although she's only retelling the story, the legend seems to be that his shapeshifting powers come from the hook, not necessarily his other demigodly abilities.

Maui's song also seems to indicate the hook gives him additional powers, if the Mini Maui illustrations are to be believed. He lassoed the sun, and pulled islands from the sea.

Our only real contradiction comes from Maui's own mouth:

Moana: Can't you shift shape or something?
Maui: You see my hook? No magic hook. No magic powers.

But, that seems to be somewhat of an exaggeration, or a specific reference to his shapeshifting, but not all his abilities.

12
Did Angier know that Borden was backstage at his final magic show?
2
Does the interviewer really not know his subject's name?
8
Did Maester Luwin really believe that sorcery and magic is no more?
9
How does Percival Graves use magic without his wand in Fantastic Beasts?
1
How did Maui live when he was human?
1
Does the giant coconut crab in Moana live underwater?
10
Why did Maui try to abandon Moana in a cave without any food or water?
20
Why does Daenerys need a translator?
5
Why was Māui having trouble with his transformation powers?