What is Mycroft's job?

In the new BBC series of Sherlock, what does Mycroft actually do?

He seems to have a lot of power, seeing as how he can people spied on, deals with terrorists, foreign threats etc. But then he also deals with the private problems of Royals, knows the Queen.

I would have thought he would be something like the head of MI5, but then he stays too much in the background. I don't imagine him, for example, briefing the MPs on the threat of cybercrime.

Does he have some sort of a special position? A job created just for him?

His official position is never stated, either in the TV series or the canon Doyle stories.

Essentially, in the TV series, he is a troubleshooter for the British establishment granted (or assuming) great powers and abilities.

In line with the the Doyle stories, he is referred to by Sherlock as follows:

"He is the British Government – when he's not too busy being the British Secret Service or the CIA on a freelance basis."

A Study in Pink

This is very similar to the Doyle description...

"Practically he is the British government [...] the most indispensable man in the country." He apparently serves as a sort of human computer, as stated in "The Bruce-Partington Plans":

He has the tidiest and most orderly brain, with the greatest capacity for storing facts, of any man living. The same great powers which I have turned to the detection of crime he has used for this particular business. The conclusions of every department are passed to him, and he is the central exchange, the clearinghouse, which makes out the balance. All other men are specialists, but his specialism is omniscience. We will suppose that a minister needs information as to a point which involves the Navy, India, Canada and the bimetallic question; he could get his separate advices from various departments upon each, but only Mycroft can focus them all, and say offhand how each factor would affect the other. They began by using him as a short-cut, a convenience; now he has made himself an essential. In that great brain of his everything is pigeon-holed and can be handed out in an instant.

"Well, his position is unique. He has made it for himself. There has never been anything like it before, nor will be again

A. Conan Doyle - The Bruce-Partington Plans

It was answered in the first episode A Study in Pink only, here is that conversation:

Sherlock Holmes: Not what?

Mycroft Holmes: For goodness sake, I occupy a minor position in the British government.

Sherlock Holmes: He is the British government when he's not too busy being the British Secret Service or the CIA on a free-lance basis. Good evening, Mycroft. Try not to start a war before I get home. You know what it does for the traffic. - IMDb

According to Mycroft Wiki:

Mark Gatiss plays Mycroft in the 2010 BBC television series Sherlock of which he is the co-creator. In this contemporary version, Sherlock and Mycroft exhibit smouldering animosity toward each other (which Dr. Watson characterises as "sibling rivalry" and Mycroft himself refers to as a "childish feud"). Mycroft is part of the Cabinet Office, and is so powerful that he can use mass surveillance to track Sherlock.

In the beginning of the Season 4 Episode 1 (The Six Thatchers), it's shown an image of a classified notice indicating a top secret information, and the addressee: The Cabinet Office 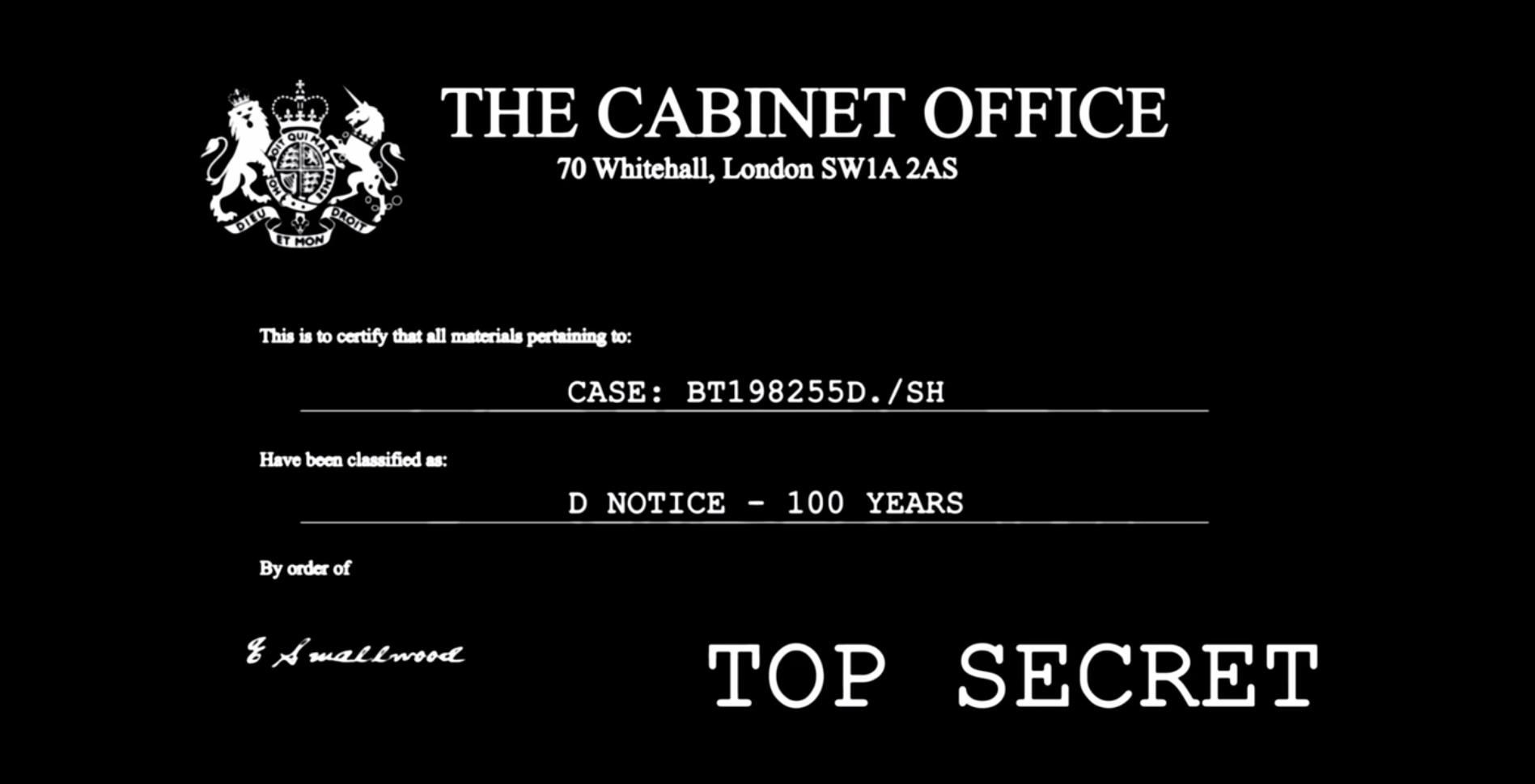 Although in Baker Street Wiki, it's said that he has even a higher level clearence than the Cabinet Office:

Mycroft claims to merely "occupy a minor position in the government." However, according to Sherlock, he functionally is the British Government, acting as the control centre or "clearing house" for all government actions and decisions.There are signs throughout the series that Sherlock Holmes is right about Mycroft's high position in the UK Government, such as his ability to control CCTV cameras at will. He also is shown to have the ability to hack into cash machines and make them display messages he wants the user to see. "The Reichenbach Fall". Sherlock (2010). Series 2. Episode 3. BBC One.

Reflecting his high position is his priority level "Ultra" and clearance level higher than the Cabinet Office or even the Prime Minister: him and a group of peers with certain codenames are the only people to know what really happened at Appledore and doctored the footage that will go public and even managed to clear Sherlock of his crimes. He is also implied to have a great say over certain policies: the fact that the British Government stopped using freelance agents for missions after the incident in Tbilisi is his initiative. With his priority level, he has access to MI5's top secret archives.

Some details about the Cabinet Office:

The Cabinet Office is a department of the Government of the United Kingdom responsible for supporting the Prime Minister and Cabinet of the United Kingdom. It is composed of various units that support Cabinet committees and which co-ordinate the delivery of government objectives via other departments. It currently has just over 2,000 staff, most of whom work in Whitehall. Staff working in the Prime Minister's Office are part of the Cabinet Office.

The Cabinet Office's core functions are:

Other functions include oversight of the Crown Commercial Service and the accreditation of Social Impact Contractors.

In His Last Vow, S03E03, Magnussen is reviewing his mental files on Sherlock. Sherlock's file reads, in part:

While it's not stated explicitly that he's the head of MI6, it's on screen that he works there. 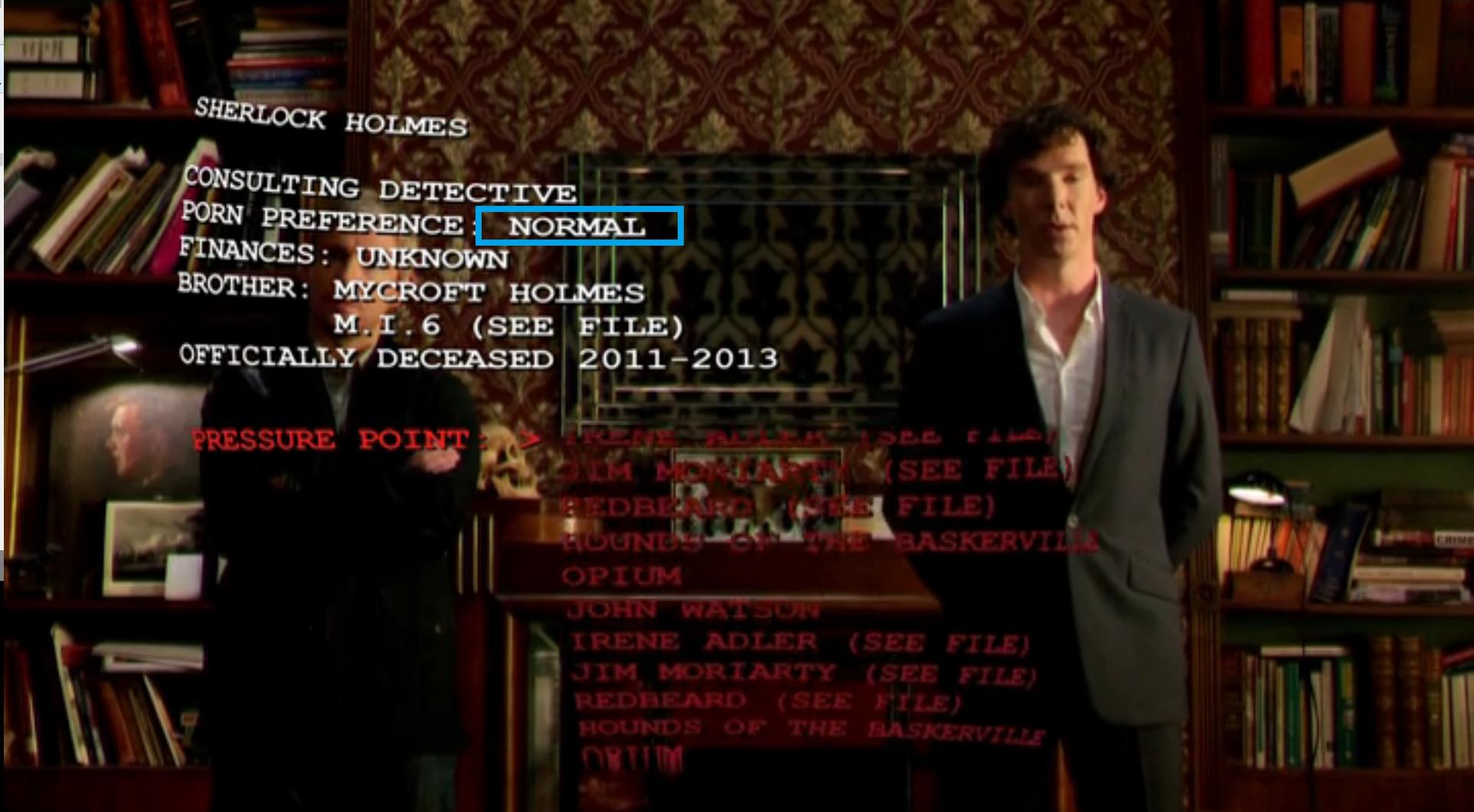 He has NO official position, nor would he want one on a permanent basis and that would involve him having obligations.

However, all the people who have a great deal of power and/or influence know of him and know if they ask him for a solution, they are going to get a very very good one. Hes basically the most intelligent person on the planet by quite a long way (More so than Sherlock by a fair margin) but is too lazy to have any desire for power or ambition.

“All other men are specialists, but his specialism is omniscience.”

Not the answer you're looking for? Browse other questions tagged character sherlock .

5
What kind of job three friends do in Pyaar Ka Punchnama?
6
Who is in the painting behind Mycroft's desk in "The Empty Hearse"?
13
What makes Sherlock and Watson such good friends?
15
What happened to Penny's pharmaceutical sales rep job?
3
What is the relation between Jim and Richard?
4
What was Cotton Hill's job in the military?
6
What is the marital status of Mycroft Holmes?
62
What was Chandler Bing's job?