Is the fat trout trailer in Twin Peaks: The Return, part 6 the same we see in Fire Walk With Me?

So Deer Meadows is near Twin Peaks? I didn't know/can't remember that. And what's the deal with the electric pole nº 6, we see it in Twin Peaks:Fire Walk With Me when Carl says he has been in places (black lodge? room above convenience store?) and we see it in the missing pieces when it shows the room above the store. So what's the connection between the pole (or that location) and the spirits from the lodge?

If you take a look at the trailer park sign in S3, you'll see it's actually called "The New Fat Trout Trailer Park". 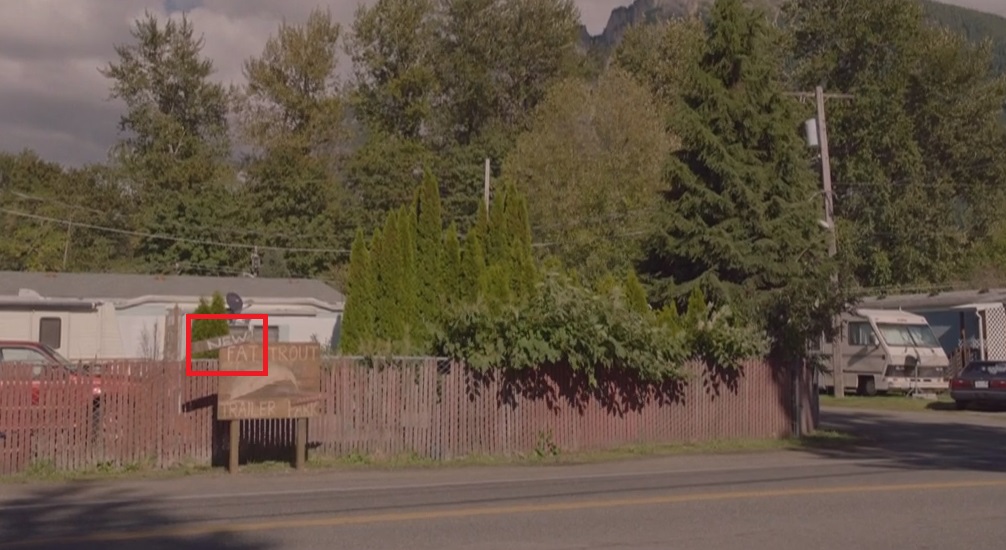 According to the book "The Secret History of Twin Peaks", Carl Rodd was a Twin Peaks native that moved to Deer Meadow, where he opened The Fat Trout Trailer Park.

He returned to his home town sometime in 2016 and opened another trailer park bearing the same name.

The book also elaborates on the comment that he's "been places". During a nature hike near Pearl Lakes as a boy, he and his classmate Maggie Coulson (The Log Lady) mysteriously vanished. They were found the next day by Andrew Packard, believing that only an hour had passed since they had entered the woods.

To answer the question in your title, The Fat Trout from The Return Part 6 is the same Fat Trout as the one seen in FWWM.

What Carl meant by saying he has 'been places' is yet to be explained, but it does imply he has visited the black lodge or the convenience store.

To answer your further questions, the electric pole also seems to have some significance as a place of supernatural activity - if I remember correctly, the boy was hit by a truck driven by Richard Horne in The Return Part 6, and in FWWM, the one-armed man bellows at Laura and Leyland from a convertible in this same place. Perhaps it is the site of the convenience store

as seen in episode 8?

Not the answer you're looking for? Browse other questions tagged plot-explanation twin-peaks .

13
Which episodes of Twin Peaks mention the concept of 'tulpa'?
8
Why wasn't Twin Peaks renewed in the 90's?
11
What do the owls have to do with the events of Twin Peaks?
12
What is David Lynch's obsession with stages, red curtains, and female singers?
7
Will I need to watch "Twin Peaks: Fire Walk With Me" before the new third season?
4
Did Harry Truman's nephew appear in the original Twin Peaks?
4
What exactly does the inside of the “Black Lodge” look like in “Twin Peaks?”
2
Are the “Black Lodge” and “White Lodge” actual places? Or are they simply dreamlike realms that characters have experienced in a common dream?