In one of the pivotal scenes of the movie, Diana goes out into No Man's Land between two trenches. She is eventually held in place by concentrated machine gun fire, using her shield to protect herself.

A normal metal shield would eventually get too hot and break under this sort of concentrated fire. What made Diana's shield special to allow it to withstand this sort of attack?

We don't know but it seems to be a magical artifact of some kind.

When Diana decides to leave the island she scales the tower and takes the Lasso, Shield, and "GodKiller" Sword...all secured in the tower.

Since both the Lasso and Sword are magical it can be inferred that the Shield is a similar object or that it's infused with Diana's power.

Diana is not merely a gifted Amazon, she’s a full-fledged demigod. And rather than “channeling” the gifts of Zeus through her bracelets, etc., Diana is the source of her own power.

So perhaps the same applies to her shield.

It should, however, be noted that this shield is different in appearance from the one in Batman vs Superman but then 100 years pass between the two movies 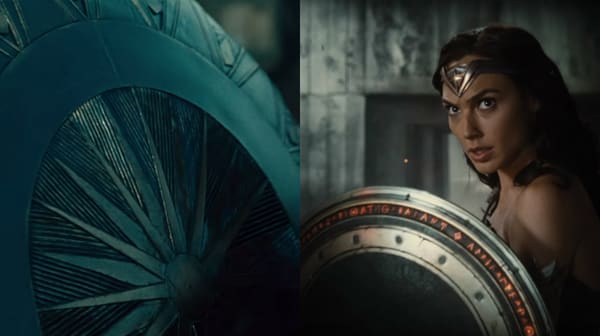 Magical bracelets and armor. In the DC universe, their weapons are made of a metal called amazonium which is nearly indestructible, and only Amazon science can forge it into desired metal shapes. Granted, that's Pre-Crisis.