Why is Edward in a white limousine at the end of the film?

In Pretty Woman, the limousine that is available to Edward while he is in Beverly Hills for the week is Gray in color and is driven all week by a chauffeur named Darryl.

During the final scene of the film, a white limousine pulls up to Vivian's apartment building with Darryl driving it.

Why is Edward suddenly in a white limousine? Does the color of the limousine have any significance or was it just an oversight by filmmakers?

Earlier in the movie, Vivian says

When I was a little girl, my mama used to lock me in the attic when I was bad, which was pretty often.

And I would-- I would pretend I was a princess...trapped in a tower by a wicked queen. And then suddenly this knight... on a white horse with these bright colors flying would come charging up and draw his sword.

And I would wave.

And he would climb up the tower and rescue me.

So when Edward arrives, he's in a white limo (to represent the horse) and carrying an umbrella(?) as a sword, and perhaps the flowers (as bright colors) and then climbs her building (the tower) to resue her from her "prison". 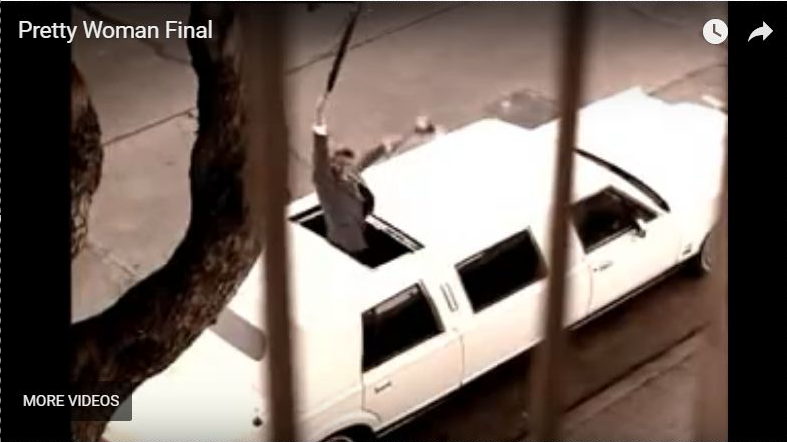 "Why is Edward suddenly in a white limousine?", I suspect that Edward rented specifically to playfully fulfill her childhood fantasy.

This is the most reasonable interpretation. Having realised he's in love with Vivian, he sets out, in the only way he knows how, to fulfill the previously stated dream.

He's riding in like a knight in shining armour to rescue his princess.

The limousine is white because, in the more traditional children's stories, the knight's horse is often depicted as being white (part and parcel of the term "white knight.")

He's also standing up through the sunroof as though he were riding on the limo instead of simply sitting in it, and (as you can see in the clip) he even goes to the extent of climbing out of the sunroof and jumping down, rather than using the door to get out. These details further establish the metaphor of the limo as a "horse" to Richard Gere's "knight."

In-universe, the argument could easily be made that he deliberately changed to a new limo in order to make this exact impression as he came to pick up his love.

Not the answer you're looking for? Browse other questions tagged props pretty-woman .

10
Is the Stay Puft brand brought into any other films?
33
Why do so many movies & TV shows feature recognizable, un-branded or re-branded products?
24
How do they film money in TV or movie?
10
Why do they sometimes not use a real operating system in films?
2
Why do some movies have photoshopped pictures of the 'family'
16
What is the significance of the multiple references to watches throughout the film?
1
Why do newspapers in film have random article text?
37
Why would Vivian think that Edward couldn't afford $300 for her to stay the night?