Wonder Woman in comics is associated with World War II not World War I, but in 2017's film Wonder Woman, it's set during World War I. What was the reason for this drastic change? Is it to avoid similarity from Captain America: The First Avenger or is there any other reason for it?

Producer Charles Roven felt that WW I held special meaning for Diana. Amazons are skilled in hand to hand combats. They are also used to the fact that fight is an honorable thing. But all of this was changed in World War I when automated arms were introduced and the armies were fighting with guns, bombs, rifles etc. It was no longer what would he call honorable.

Therefore, he wanted that culture shock. Which is why, he chose World War I.

Here is an excerpt of his interview given to IGN(emphasis mine),

IGN: The decision to set Wonder Woman’s solo film in World War I is very interesting. It's not a time period we've seen a heck of a lot of in movies these days. Can you talk a bit about that decision?

Charles Roven: One of the reasons that we picked World War I was we felt that it [worked] in terms of that war and what it meant to Diana. Diana was raised on Themyscira with the lore, the history of the Amazons, and the Amazons, you know from the canon and the New 52, were created to be inspirations towards mankind. And [they] helped promote peace and goodwill amongst men and mankind. But at some point, they were enslaved by mankind and they had to break their shackles, which is why they wear the bracelets, as symbols of that. And they were given Themyscira by Zeus.

But they're always training and they're warriors, and there's great pride to their abilities, their fighting abilities, etc. And even though they haven't had any war on Themyscira, they're used to fighting being an honorable thing. They're used to one on one combat, or even if it's armies fighting each other, ultimately that great legacy of fighting hand to hand. The best warrior wins. There's a lot of contact, and World War I was the first war where that changed, where it became more remote. You were killing people -- whether it was through guns, through rifles, through mortars, through bombs, through gas attacks -- that you didn't even know, that you never looked into their eyes. And it ceased to be what I would call an “honorable war.” And so we wanted that culture shock. And those images of no man's land and the trenches and fighting for years against an enemy that you really don't see, who's a hundred, two hundred yards next to you, but you never see their face, we just wanted those images in the movie because we thought that it would be very, very symbolic to her.

Entertainment Weekly asked this of the director and producers.

Screenwriter Allan Heinberg says the decision was a prescient one considering some of the similarities between that time and today.

“We are in a very WWI world today with nationalism and how it would take very little to start a global conflict,” he says.

When Heinberg and producer Zack Snyder were first breaking down the story structure for the film, WWI was appealing for a few reasons. “It’s the first time we had an automated war,” Heinberg says. “The machine gun was a new invention. Gas was used for the first time. New horrors were unleashed every day.”

“At first, I questioned it because it wasn’t her actual origin story, but very quickly I saw the genius behind it,” she says.

“World War I is the first time that civilization as we know it was finding its roots, but it’s not something that we really know the history of,” she adds. “Even the way that it was unclear who was in the right of WWI is a really interesting parallel to this time. Then you take a god with a moral compass and a moral belief system, and you drop them into this world, there are questions about women’s rights, about a mechanized war where you don’t see who you are killing. It’s such a cool time.”

As supplemental information, one thing to consider is that Wonder Woman, especially in this film, has a WW1 counter-part: Columbia.

"Lady Columbia," the embodiment of America and American liberty was a popular icon in the 19th century, especially between the American Civil War and The Great War. Columbia was featured prominently in American propaganda such as advertisements for Liberty loan drives to fund American involvement in the war.

Columbia as a symbol kind of fell off by the 40s.

I am not saying that this was the only consideration, but I suspect the filmmakers were aware of this. And "yeah," probably the primary reason was to not be Captain America.

Two images from WW1. The bottom image is from a painting donated to an 1864 sale to benefit the US Sanitary Commission (think: Red Cross). 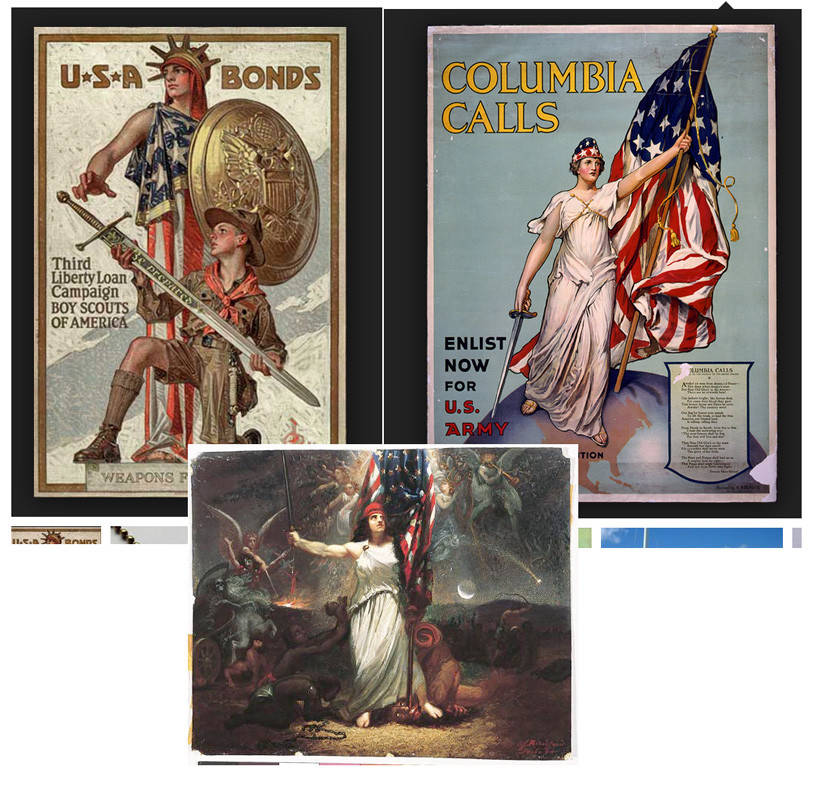 Not the answer you're looking for? Browse other questions tagged production dc-extended-universe captain-america-the-first-avenger wonder-woman .

6
Is there any relation between Johann Schmidt and Klaus Schmidt?
2
Why is Captain America unbeatable?
11
How old is Wonder Woman?
4
Intentional link between Ares' "armistice which cannot hold" and real Treaty of Versailles?
7
Why was Ares contradictory to common Mythology?
7
What did Wonder Woman do during World War II?
5
Impact of Wonder Woman's action on the end of World War I?
15
Using Tesseract as a time stone?
4
Why Captain Marvel is not the First Avenger?