Why/how does Gupta have Buck's knife?

In ice age 3, we are introduced to the crazy weasel Buck. One of the most defining things about him (other than his eyepatch) is his knife (he got both at the same time). Here is a still of him with it:

Later, in Ice age 4, we see Gupta, one of Gutt's crew give Weiner his knife: 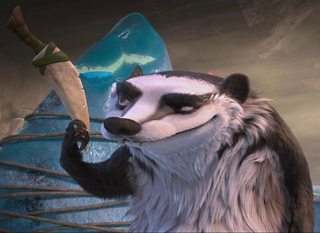 Later on we see buck still having his knife in ice age 5.

To me, these seem to be the same knife, and I'm not alone: someone has already asked this question. However, the answer they got was not very helpful.

Is there a better explanation as to how a seafaring pirate got a dino-tooth (and not just any Dino! This is the tooth of Rudy himself!) knife, or is it just animator laziness?

I think the resemblance is just that. They probably just couldn't be bothered to make another original "rugged knife" model for the movie, so they just used Buck's Knife model instead. Maybe it was a placeholder for until they made another knife, but they accidentally left it in.

No one knows. My guess would be that Buck used to be a member of that pirate crew, that Gutt saved his life from Rudy and THAT’S how Gutt got the tooth, he saved Buck from Rudy.

Not the answer you're looking for? Browse other questions tagged ice-age-4 ice-age-5 .