Why did Syrena help Jack Sparrow?

Towards the end of On Stranger Tides, Syrena (who has just been freed by the dying priest-guy) helps Jack by giving him the chalices.

Ok, so this is just speculation by putting some things together and not a concrete answer.

So in POTC mythology there seemingly are both Sirens and Merfolk, but some argue that the mermaids have rather similar qualities to the sirens, but in the young Jack Sparrow novels for children, there is a faction of mermaids that helped the sirens lure men to their deaths and also ultimately did the bidding of Davy Jones. 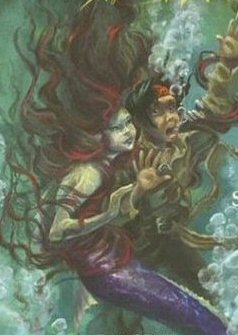 "So, it has recently become clear to me that the Sirens, or something like them, are the reason for all of this bizarre, strange and utterly unacceptable behaviour." ―Jack Sparrow to the crew of the Barnacle (Young Jack Sparrow Novels)

One of the merfolk dragging young Jack Sparrow to Isla Sirena. *"We are not the Sirens. We are the merfolk. **We sing our own melody and we do the bidding of the Sirens."* ―Morveren, Aquala and Aquila to Jack Sparrow[src] http://pirates.wikia.com/wiki/Siren

The merfolk, also known as the merpeople and sometimes referred to as Scaly Tails, were mythical creatures of various legends and lore, known to be half human and half fish. The merfolk of Isla Sirena, the majority of them being mermaids and one known merman, served as agents of the Sirens, dragging many sailors down to a watery grave.

The mermaids of Isla Sirena were part of the merfolk that did the bidding of the Sirens, who were in turn ruled by Davy Jones. They resided in chambers within Isla Sirena, and had control over various creatures that inhabited Davy Jones' Locker, including iguana monsters and sea beasts.** http://pirates.wikia.com/wiki/Merfolk

Ok. So if we assume this magical song is hypnotism or sound-kinetics, then the kinetic quality may extend itself much further in telekinesis knowing the feelings of any person or man within some radius. One might be able to argue that Philip and Syrena's relationship hinged on being able to go beyond words as the bond seemed to be more visceral.

It's also possible though that Syrena herself is an enigma. POTC wiki goes out of it's way to mention that she is not "typical" of other mermaids, including that she was exceptionally shy or timid. Perhaps she has abilities other mermaids/merfolk/sirens to do not.

Not much is known about Syrena's early life in Whitecap Bay. Syrena wasn't a typical mermaid; while the other mermaids are quite dangerous, she was rather timid.

I had a theory that Philip was to take Will's place on the Flying Dutchman, as being a clergy boy (job of the Flying Dutchman's Captain is to "ferry the souls of the dead") in love with a mermaid, seemed quite ideal, but DMTNT seems to have found a work-around, although the ending suggests that some things have been "reset"--so maybe Philip and Syrena are still meant to play a role--and maybe more will be revealed about her abilities and if she ties into the Davy Jones sirens and mermaids plots introduced in the young Jack Sparrow novels.

Note: Name Syrena is similar or word play on Isla Sirena. And Carina Smyth surname is also a variation of Smith and Laura Smith and Arabella Smith are also main characters in the young reader novels.

8
Why didn't Norrington try to save himself?
8
Why didn't Hannah Baker ask for Tony's help?
9
Why did David drop the vases?
14
Where did Sparrow's compass really come from?
10
Why does Luv cry?
3
If mermaids die in sunlight, how did Syrena survive?
6
Why does Tia Dalma refuse to resurrect Governor Swann?
4
Why did Syrena take Philip under water?
4
Why did Nancy forgive Steve even after he called her a slut?