Was the Iron Giant a war machine bent on human destruction? [closed]

First, the weaponry. Well, I vaguely recall weaponry. The IG has powerful weapons. I could understand that they may have been for defense only, but since he's a machine and would he had been a research robot they wouldn't have put any weapons on him at all.

Secondly, the dent in the IG head. Amnesia right?!?

I'm just saying that it seems that the Iron Giant is a story about how a war machine landed on earth and would have destroyed the planet had it not been for his amnesia. 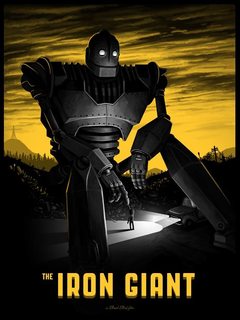 I found this scene that seems missing from the movies after its release in 1999 that is now available in a director's cut where the Iron Giant is dreaming and he has a nightmare of him, along with hundreds of other giant robots, storming cities and then eventually destroying the planet. In the nightmare, he sees a reflection of himself in full destruction mode and wakes up frightened.

During this nightmare, there are two alternating refrains: one man saying "you don't even know what it is or where is came from!" And the other is the boy saying "you're not going to hurt me are you?"

Then we have to consider that after the Iron Giant collides with the nuclear missile, he is still not destroyed. This suggests he was built to withstand attacks and weapons, thus making him a war machine. The perfect one.

Not the answer you're looking for? Browse other questions tagged character the-iron-giant .

4
Was the “Dr Mann” they meet on the planet a transhuman version of KIPP and Mann?
6
What new scenes were added to The Iron Giant: Signature Edition?
8
Why does Dr. Cal Lightman walk with his back and neck bent front and spreading his shoulder on the sides?
2
Did the outside world suffer extensive destruction during the time loop?
2
What is the relationship between the Human Target TV series and the Human Target appearing in Arrow season 5?
16
Where was Thanos before the events of Avengers: Infinity War?
15
Where was Karl Mordo in Infinity War?
42
Who's this lady in the war room?