The Glaive from Krull

The Glaive was a mystical 5 pointed weapon from the movie Krull. 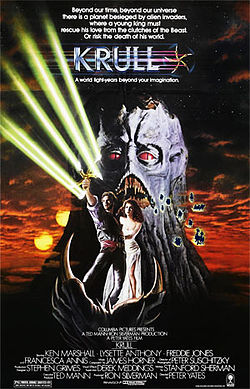 Did the glaive grant power to those who wield it or did the main character's family blood line already have the elements inside them to wield the glaive? (Him pulling it from the magma kind of forced this question.)

It granted it's power in time of need-In this movie-protecting the world. The glaive wasn't a King Arthur sword in a stone, or part of just a bloodline. It was more like Mjollnir in the sense of joining with a pure hearted person. It only really activates during the final fight with the Beast, even though there were countless times it could have been used to save the party from having members die. Hell even the giant spider would have been sliced.

When it does activate it did respond to Colwin's movements. So it was in some kind of sync with his mental state. None of his other party was truly "good" or alive like himself except for maybe Ergo and Titch and they just didn't possess it. You do see the Beast grab it and prevent it from doing further damage, so it's even possible that a normal person could pick it up, just not maximize its use.

Not the answer you're looking for? Browse other questions tagged plot-explanation krull .

14
Why does Magnussen list “Hounds of the Baskerville” as a pressure point on Sherlock?
4
Why did Sean get onto the plane in the Event?
16
How do we interpret Louise's memories in Arrival?
5
Did Jack die at the end from a shotgun wound?
9
Does Thor lose certain powers without his hammer?
2
Why doesn't the bounty hunter die in this X-Files episode?
1
How did Neil know that Volkov is going to shoot the protagonist?