What meeting does Jack have beyond the horizon?

At the end of Dead Men Tell No Tales, Sparrow steers the Black Pearl and states

I have a meeting beyond the horizon.

Is this some sort of foreshadowing (like, he is going to go resurrect Barbossa at World's End or something) or just a "I'm going on an adventure!" sort of quote?

The post-credits scene does hint at a sequel with Davy Jones. We see Davy Jones return to Will while sleeping, and when Will wakes up, he thinks it was just a dream, but we can see the barnacles and algae Davy Jones left behind where he stood.

If you recall, in the 3rd movie, Jack is trapped in Davy Jones Locker, where we see dead men, including Elizabeth's father. So, dead men usually end up in Davy Jones Locker. That was Davy Jones real function, gave to him by the Goddess Calypso. To guide the dead at sea, to the afterlife.

Barbossa himself has already been resurrected once by Tia Dalma (who is Calypso's human form), showing it is possible to bring back the regular dead from Davy Jones Locker.

There is another level of the Locker, where Jack is trapped. Tia Dalma says he is being punished, not really dead nor alive. It seems to be much harder to bring someone from this "purgatory", but it still is possible.

The way they traveled between to and from Davy Jones Locker, had always a very theme of sailing of the edge of the world. The rotating map, had written "over the edge, over again". We never get to see how they go in, and coming out we only realize it has something to do with the sunset/sunrise, where the Black Pearl is turned upside down.

The meeting beyond the horizon might be with Davy Jones, might be to save Barbossa, might just be, "The seas await me". Hard to tell, but the movie does point to a Jones sequel.

Just to echo the first answer, but with different source, Dead Man Tell No Tells was/is meant to be the first in a series of final [Jack Sparrow] films, as one trailer states,

Shortly before the release of On Stranger Tides, it was reported that Disney was planning to shoot the fifth and the sixth films back-to-back, although it was later revealed that only the fifth film was in development. On March 4, 2017, director Joachim Rønning stated that Dead Men was only the beginning of the final adventure, implying that it would not be the last film of the franchise and that a sixth film could be released.

In September 2017, producer Jerry Bruckheimer indicated that another Pirates of the Caribbean sequel is still possible if Dead Men Tell No Tales does well in its home release. In October 2017, Kaya Scodelario said that she was contracted to return for a sixth film. Shortly after, it was announced that Rønning is being eyed to direct the film.

In addition it should be noted that there are some loose threads, whether it be Davy Jones existence at the end of DMTNT, Angelica being left stranded with the Jack Sparrow voodoo doll at the end of OST, or what ever happened to Philip and Serena, and now that Carina knows the truth about her father, will Captain Barbossa remain dead for good? (It's also why I asked this question).

Contradictions or Something Else?

It also has been reported that some kind of Pirates of the Caribbean Reboot is in the works featuring the Deadpool writers at the helm and with a strong possibility that the theme park character, who has recently been "re-imaged" at Dinsney's Pirates of the Caribbean Theme Park, named Redd, will be the series lead with Jack Sparrow/Johnny Depp being out. 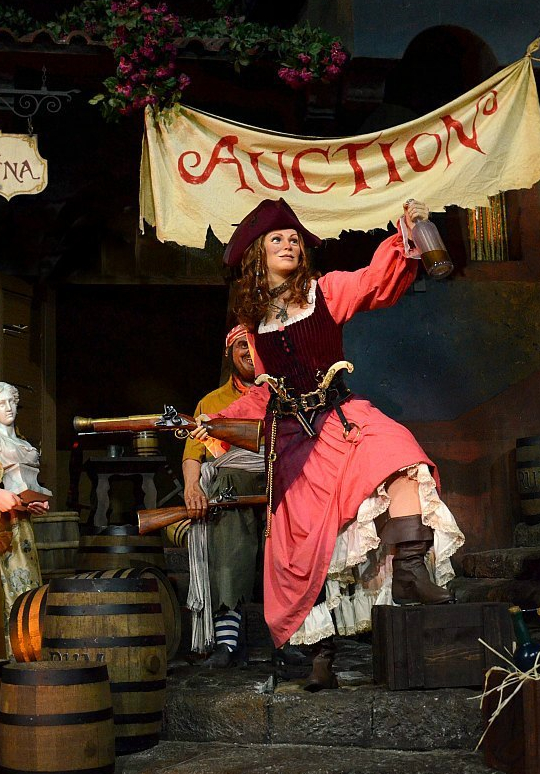 In October 2018, it was reported that Disney is planning on restarting the franchise with Rhett Reese and Paul Wernick writing the script and Jerry Bruckheimer returning as producer. It is unknown if the film will be a complete or soft reboot of the franchise as Disney has not yet made any official announcements. In December 2018, Walt Disney Studios President of Production Sean Bailey confirmed that the character of Jack Sparrow will not be present, explaining, "We want to bring in a new energy and vitality. I love the [Pirates] movies, but part of the reason Paul and Rhett are so interesting is that we want to give it a kick in the pants. And that's what I've tasked them with."

However, Disney has only confirmed a reboot without Johnny Depp and nothing else.

What's the right mix of original and licensed programming on Disney+?

Many of our core brands are going to be in that service. Some of this content will have an initial window, like a theatrically released film, some will be on television first, some will be original for the service. It will skew naturally from an hours perspective, because of how much we've invested over the years, toward product that's non-original, but we're making a lot of original content.

It is my speculation that there is some misinformation that POTC six will be the reboot, as I think the reboot is actually going to be a spin off TV series for Disney+ (Disney's new streaming service), since Bob Iger has mentioned how invested he is in that market and that many other franchise spin offs are already in development there. Pirates of the Caribbean is really Disney's only major franchise that hasn't made an official announcement for a project in development there.

Therefor I think we will also get Pirates of the Caribbean six with Johnny Depp respectively, at some point.

Ever think about how the fourth one ends? Maybe hes going to get Angelica, if she's survived that long, or if she was never picked up by a passing ship.

8
Is Salazar really what Jack fears most?

7
What are the crabs at World's End?
11
How is the Black Pearl caught up?
1
Restoring the Black Pearl - Ritual Question
1
Is that the Kraken's skeleton from At World's End?
25
Is this pirate in the background a young Edward Teague?
31
How does everyone know Jack's name as Jack Sparrow?
5
Can Barbossa be resurrected/saved?