As per Egyptian mythology

A'an, the god of equilibrium, who reported when the scales weighing the deceased's heart against the feather

But why does she meet Ibis if she is Christian (I think she is Christian. Let me know if I am wrong here), and as she mentioned in season 1 episode 4 she does not particularly believe in god or anything?

Is there any reason why this event is occurred?

NOTE : In the book it is not mentioned that laura met Ibis after death.

It's Anubis, not Ibis. 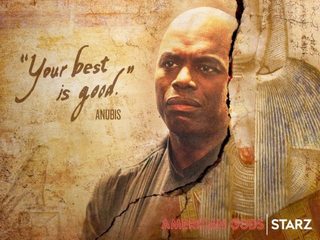 The god Laura meets in the afterlife is Anubis, not Ibis. In the novel he goes by the name of Mr. Jacquel. You can read up a short article on Anubis here.

In the Starz TV series, you can tell the difference by the glasses. And Anubis is gloomier, shaved head, and occasionally turns to a dog. 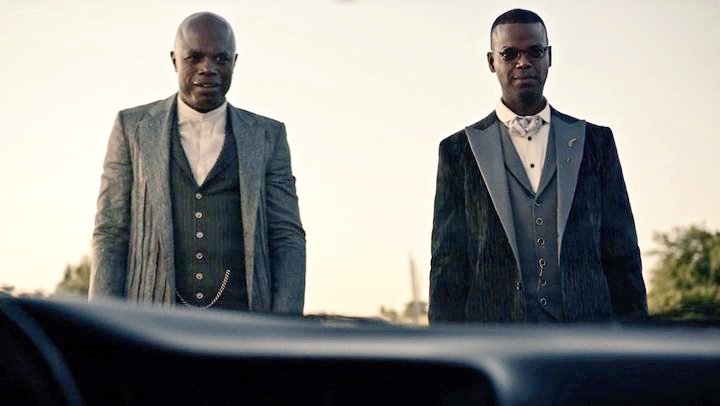 Why an Egyptian god?

While there hasn't ben an explicit explanation in the series, and you correctly remark that Laura didn't go to Anubis in the novel (we don't know anything at all about where Laura went after death), a recurring theme in Neil Gaiman's works is that of passive worship.

Laura works in an Egyptian-themed casino: 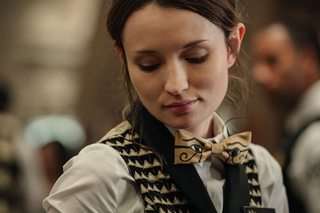 It is quite possible, that her working there, seeing the Egyptian statues, people dressed in "ancient" Egyptian clothes, and more importantly - earning money from that place - was at least subconsciously a "worship" to the respective gods.

One thing that is absolutely lethal to gods is being forgotten, which we hear from Mr. Wednesday in Zoryas' apartment: 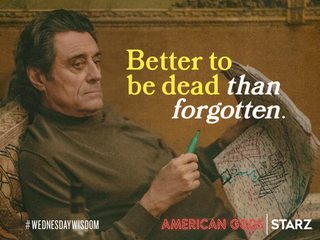 But thanks to all the Egypt-styled casinos and such like, the Egyptian pantheon - or at least more popular gods, like Anubis, are unlikely to be forgotten, and Laura plays a part in keeping them alive - by working in the casino.

This is exactly what happens to Easter, and what Wednesday uses to recruit her: people celebrate Easter, yes, but they don't do so in Easter's real name - Eostre, the pagan goddess - so they're effectively only "passively" worshipping her.

“There,” said Wednesday, “is one who ‘does not have the faith and will not have the fun.’ Chesterton. Pagan indeed. So. Shall we go out onto the street, Easter my dear, and repeat the exercise? Find out how many passers-by know that their Easter festival takes its name from Eostre of the Dawn?

“We could try it,” continued Wednesday. “But I would end up with ten fingers, ten toes, and five nights in your bed. So don’t tell me they worship you and keep your festival day. They mouth your name, but it has no meaning to them. Nothing at all.”

You could see, in the novel, that Bast (who was in the form of the cat), another goddess of the same pantheon, isn't doing very well - personally, when reading, I thought she was a little mad.

Namely, she spends most of her time in the cat form, which is, I think not a good thing, at least according to Mr. Jacquel:

Jacquel, when, eventually, he began to answer, wasn’t talking about the weather at all. “You look at me and Ibis,” he said. “We’ll be out of business in a few years. We got savings put aside for the lean years, but the lean years have been here for a long while, and every year they just get leaner. Horus is crazy, really bugfuck crazy, spends all his time as a hawk, eats roadkill, what kind of a life is that? You’ve seen Bast. And we’re in better shape than most of them. At least we’ve got a little belief to be going along with. Ibid, chapter 8.

People don't worship Bast a lot anymore (or do they? :D), because a cat-goddess isn't needed right now (with all the vets and such like). It is notable that Bast isn't very popular, and is decaying as well, in another work by Neil Gaiman, The Sandman: 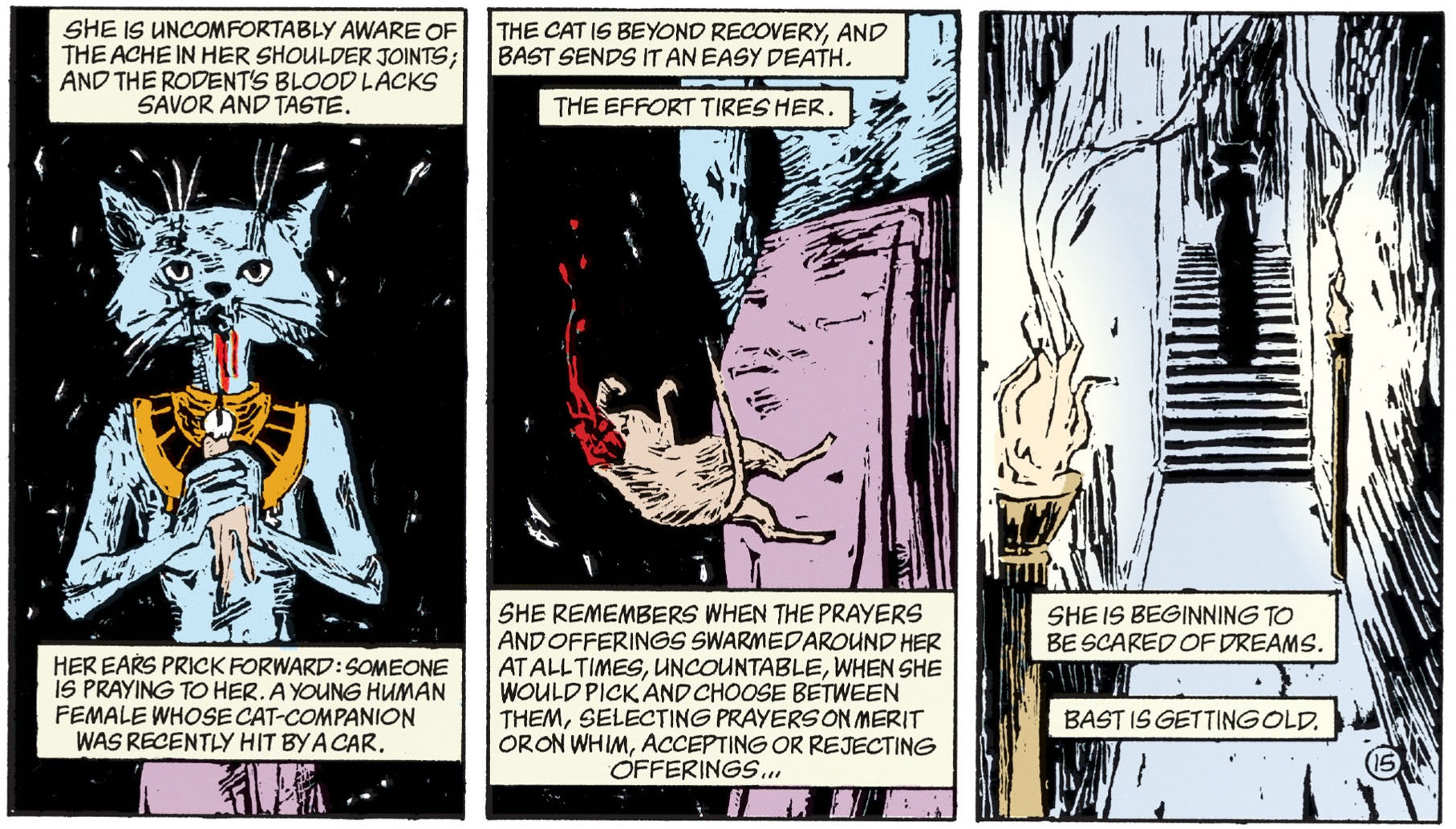 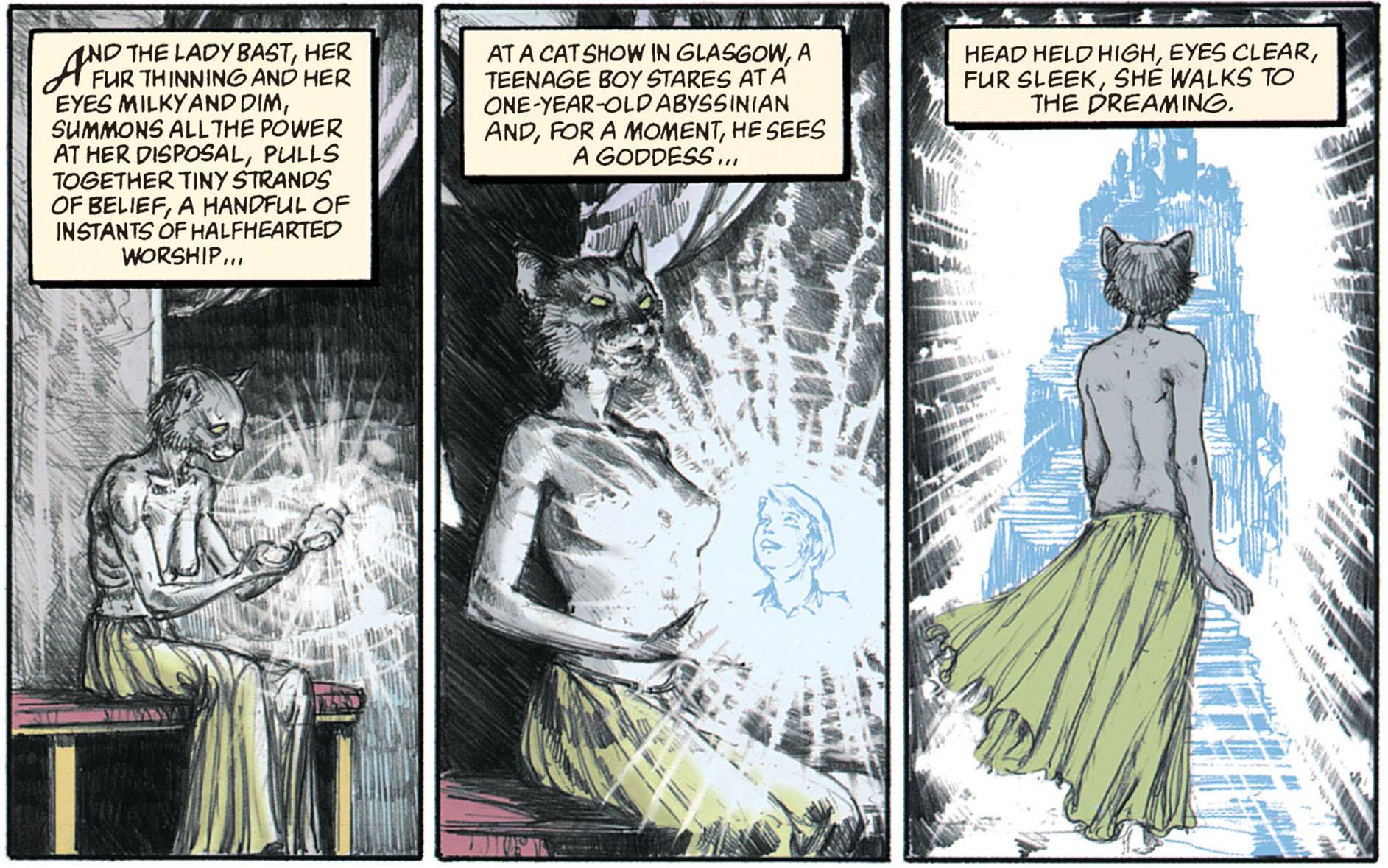 The Sandman - The Wake, chapter 1.

You can see that while she's not worshipped directly ("I dedicate this cat food to Bast!"), she is still getting power from occasional belief, and even images that exist only in humans' imagination.

Laura is not a Christian, she is an atheist. When Shadow asks her about "what does she believe happens after you die" she replies "simply, you rot".

But then, as @Gallifreyan pointed, she was working in an Egyptian-themed casino and in one scene you can see that on the wall that she faces there are painted two gods: a jackal-headed Anubis and ibis-headed Thoth.

So it wouldn't be hard to guess that she would often look at those pictures and mumble "Oh god, I need a break!" or something similar, and that would form a sort of a prayer. So who does she meet later? Well Anubis of course.

Similarly, the dead Muslim lady (one that fell from a chair) meets Anubis and Egyptian afterlife instead of Muslim one - she simply loved the ancient stories from Egypt mythology:

This is a Muslim home. Why does Anubis hold out his hand for me?

It is my thanks. You were once a girl with your own Tita. Who taught you the ways of Egypt old, of when the Nile was full and flooding. She told you stories of the Wolf and the Jackal, the Red Wind, and of the Child of Bast.

You do. For that, I bring you to the Scales.
Source

Not the answer you're looking for? Browse other questions tagged plot-explanation american-gods .

12
Why does Perkins leave and meet Winston?
6
How does Sarah Jane meet the Doctor?
7
How did the wolf characteristics get passed onto Laura?
9
Why did Mr.World need to involve the police?
8
Why does Thanos want everybody to meet back at Titan?
9
Why does Carpet act like he doesn't know Genie when they first meet?
12
Why could only Logan take Laura to Eden?
1
Why do many characters in American Gods pronounce Zorya as Zo-ra-yah
3
How does Fern meet a mother of her ex-students so easily?