Were the soldiers unaware of the "Biggus Dickus" scene prior to filming?

A Facebook group about general trivia stated that the soldiers in the famous "Biggus Dickus" in Life of Brian were unaware of the jokes in the scene, and therefore their attempts to refrain from laughing are actually genuine.

I've found an IMDb Trivia record about it:

When Michael Palin as Pontius Pilate addressed the soldiers daring them to laugh, he was truly daring them. The soldier extras were ordered to stand there and not laugh, but not told what Palin was going to do. Palin, in fact, can barely stifle his own laughter when saying "Biggus Dickus" in front of the soldier asked if he finds the name "risible".

But other than that, no credible source, like an interview with the actors or anything alike.

Is there any source that can verify this trivia item?

I have a physical copy of Monty Python's Encyclopythonia; which contains some interviews with the Python members.

It's not that the guards weren't aware of the script. They were. However, when the scene was being shot, one of the actors couldn't help but laugh because of Michael Palin's character. It was just that funny.

Instead of ending the scene, Palin stayed in character and approached the guard; resulting in the scene you are referring to.

However, that does not prove that the guard's reactions (after their initial unintended outburst) were genuine. They could have picked up on the fact that Palin was improvising, and they continued the scene based on how Palin was steering the conversation.

Monty Python is well known for its improvisation. In improv, when you are dealing with more than one actor; all actors need to understand what they are acting out, and will therefore "build a sketch together" on the fly.

Presumably, only the initial laugh was genuine. The rest is simply a continuation of the scene in an improvised manner.

It was not only all scripted, but the "extras" were actually comedy performers themselves.

The first guard to laugh was Charles McKeown, the Oscar nominated actor and screenwriter. He was friends with the Pythons and would later co-write and act in Brazil (1984) (pictured below) and The Adventures of Baron Munchausen (1988) with Terry Gilliam. 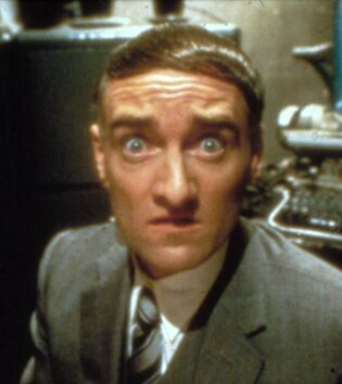 The second was Andrew MacLachlan, who would later appear in Monty Python's Meaning of Life (1983) (below right): 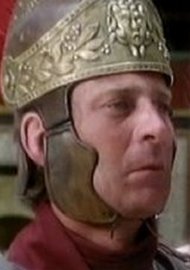 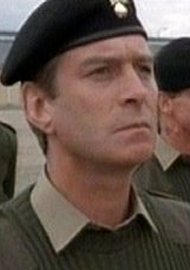 The third was Bernard McKenna, another friend of the Pythons who is an accomplished writer in his own right, and would briefly appear in Yellowbeard (1983) alongside Graham Chapman, Eric Idle and John Cleese.

The last giggling guard was Chris Langham, who is a well-known comedic performer and writer, too. His most famous role was probably in the satirical TV show The Thick of It, which would be rebooted in the US as Veep. 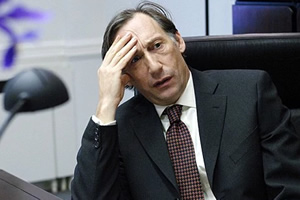 Their giggling was all completely scripted, however Michael Palin was aware that he also had to help them by being genuinely funny and spontaneous. As he wrote in his diaries for that day, Monday October 9th, 1978:

A delay for lighting, then a very gruelling day shooting the first Pilate scene. The need to keep the vital giggling ingredient fresh and spontaneous made it a little bit harder to play than an ordinary scene with set words and reactions. The success of this scene will depend on the genuineness of the guard’s reaction to Pilate. It can’t all be acted, it must be felt.

So I have to do a great deal of ad-libbing at the end of the scene – and by the end of the day I must have thought up over twenty new names for Biggus Dickus’ wife – ranging from the appallingly facetious Incontinentia Buttox to the occasional piece of inspiration which resulted in breakdown from the guards. Bernard McKenna in particular did the nose trick spectacularly – once right down my toga**.

So the actors knew they had to stifle laughter, but through 20 takes Palin had to do what he could to genuinely try to make them laugh in order to keep things fresh.

It seems the actor's reactions to "Incontinentia Buttox" were genuine, because they were all wondering what Palin was going to say.

** Note: It seems their snorting produced snot, which explains Palin's adlib at the end of the scene, "Blow your noses and seize him!".

26
What is the most expensive scene ever shot?
7
Has Jean-Claude Van Damme really no memories of filming the movie Knock Off?
10
Were Borat's interactions with the public staged?
2
Geometric figures in the corner of TV shows—why were they there?
10
Do the teams in The Amazing Race already know which countries they will be visiting prior to the production?
8
How to go about a dialogue scene when it comes to the actors speaking?
6
Why do actors often play their last scene on a movie on their first day of filming?
53
Making nature documentaries: scripting then filming or the other way?
1
Was the age of the students a factor in the filming of the Harry Potter films?
4
So what did the soldiers do who didn't fight?