OK, this one is a bit difficult, since I've never actually seen this movie. The information I've got, is what little I remember from a monthly TV-program of upcoming movies in Norwegian cinemas (so I know it was for cinemas and not a TV-movie), which I watched on Norwegian television when the movie came to Norway (which may have been a year or so after it was originally screened). Since this was probably before 1990, my memory may be a bit vague...

In Norwegian it was called "Barnetyven" - which in English would be either "The Child Thief" or "The Stealer of Children"/"The Thief of Children". I think the Norwegian title was probably a pretty accurate translation of the original Italian title...

Since I haven't seen it, I really don't know much. But I would guess it's sort of a road-movie - where they drive, stop at different places. meet people, and perhaps gets into some trouble on the way.

The movie is about a man who drives two children across the country to reunite them with some relatives. I don't think the man is related to the children, but that he's rather a policeman, teacher, a social-worker or something...

The reason they're leaving the village/town they're from, is that they've been more or less thrown/driven out - because the young girl is pregnant.

So does anybody knows which movie this could be? What it's original Italian title is? What it's English title is? When it's actually from? Who directed it? 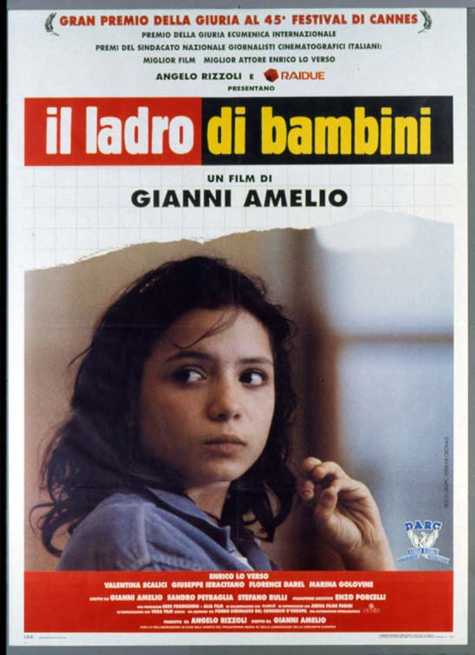 The Italian title "Il Ladro di Bambini" translates as "The Thief of Children," and the movie's English title is "Stolen Children," but both titles have to be read with great irony, because here is a film about a man who only steals children away from great unhappiness and allows them to see for a few days that life can contain joy, as well.

The movie opens in Milan, where Rosetta, an 11-year-old girl, and her brother, Luciano, a year younger, live with their mother, who forces the girl to work as a child prostitute. This element of the story, tragic and unsavory, is not dwelled on; the movie properly begins when the two children are taken away from the mother and placed in the care of Antonio (Enrico Lo Verso), a young policeman, whose job is to take them to a children's home.

The children are turned away from the church-run children's home, apparently out of fear that their past might infect the other students. Naively taking the case into his own hands, without authorization, Antonio next takes them to Sicily. As they travel all the way down the length of Italy, stopping even for a feast at the home of Antonio's parents, a bond grows among the three travelers. The movie is a road picture, in a sense: The people and experiences along the way are part of the education of Antonio, Rosario and Luciano, and what we see through the car windows is a cross-section of modern Italy, good and bad.