I was told the IMAX 70mm 15perf film is simply a regular 70mm film turned sideways. Is this true? According to the following image, it does not make any sense as the frame is that much larger than that of a 8perf one.

I was told the IMAX 70mm 15perf film is simply a regular 70mm film turned sideways. Is this true?

Yes, this is true. A film strip is just a ribbon of celluloid with light sensitive chemicals on it. Prior to exposure, the entire ribbon of film has no "frames" - it is just made with perforation holes so that the gears and pins can move it through the camera and hold it steady for each image exposure - 24 times a second.

Maybe it would help to look at a 15-perf and 8-perf side by side with the images rotated so they match visually? 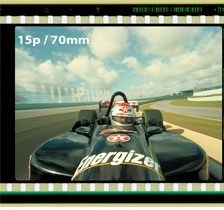 Accommodating such a large image area is no small undertaking. At 24fps the film moves at 3.8 miles per hour and a platter is between 4 to 6 feet in diameter for a 2 hour movie. For more information, see the IMAX wiki article. 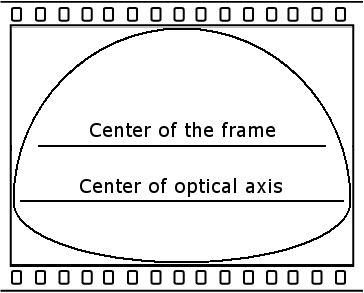 Also, note the differences in the images - the 5-perf shows significantly less image above the car. The 8-perf and the 15-perf are anamorphic, i.e. squeezed onto the frame when shot and stretched onto the movie screen when projected.

Per your comment, yes, with a fixed 70mm film strip's width, a 15-perf image has 3 times more image area than a 5-perf image (and this whether the image is looked at vertically or horizontally.)

Not the answer you're looking for? Browse other questions tagged imax .

6
IMAX DMR vs 35mm film
11
Why are not all IMAX theaters domed?
0
IMAX and Aspect Ratio
1
Which is technically visually of higher quality - 70mm without IMAX or IMAX without 70mm?
2
Why the apparent lack of IMAX 3D releases for Justice League?
8
How does Regal's RPX format compare with IMAX?