In the start of Pirates of the Caribbean: The Curse of the Black Pearl, both characters have this supposed age. Here are pictures of Comodore Norrington and Weatherby Swann in the opening scene and the rest of the movie respectively: 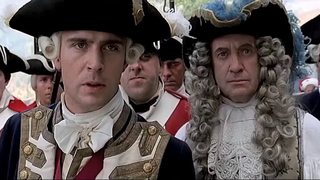 I supposed that the time that could have passed are 20 years but the Comodore doesn't comply this because he is younger than 35 years in the film.

Once a person is fully grown, their physical appearance doesn't change all that much, aside from greying hair and (perhaps) added weight. As my father likes to say: "you've stopped growing up and started growing out!"

Because of this, it's relatively simple to change the apparent age of an actor who's character is fully grown in both "past" and "present" scenes. for example, Swann and Weatherby were both adults in the opening scene, and only got older for the rest of the film, so adjusting the apparent age of the actors is easy.

However, for characters who are young children in one scene and adult later (like Elizabeth) this can't be done so easily. No (feasible) amount of makeup is going to make a 20 year old actress look like she's 8. Therefore, they need to hire a second actress to play the "young Elizabeth" role.

It's a limitation of what can be accomplished with makeup and special effects touch-ups. The reason for the dramatic changes in Will Turner and Elizabeth Swann between these two scenes is simply down to the fact that they needed to use different actors in each time period.

Not the answer you're looking for? Browse other questions tagged pirates-of-the-caribbean curse-of-the-black-pearl .

5
Did Will forget who killed his father?
16
Why is Governor Swann's immediate reaction to shoot Jack?
4
Why was Mr.Gibbs working on Royal ship?
6
How did Gibbs become a pirate?