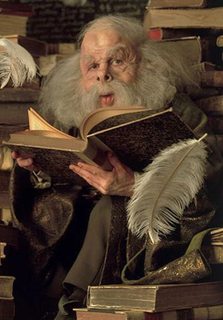 But from the third movie, the appearance has changed. 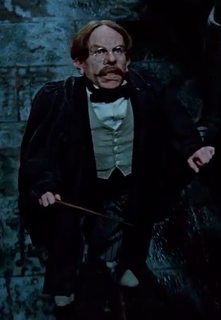 From the third movie, he looked young. This continued for the rest of the series.

As explained to Movie Pilot by Warwick Davis himself,

When it came to the third film, of course the looks of the whole films had changed.

Alfonso really wanted to put his mark on the films. And then a lot of things altered: anything from character looks, to the actual layout of Hogwarts itself.

And another thing was happening at the same time. There wasn't really anything for Flitwick in the script at all, and I got a call one day from the producer, saying basically, "There's nothing for you, but we'd love you to be in the film all the same. How do you fancy coming in and doing a kind of cameo in the film as somebody else?"

And I said, "Well, that's great, thanks for asking. I'm always thrilled to be part of all of this, anyway." So, I went in for a meeting with Alfonso, the director, and Nick Dougland, who's the make-up supervisor, and we came up with this new look for this character who would be basically the conductor of the Frog Chorus in the Great Hall. And so, we went with that.

Are they the same person?

There's been debate over whether the original Flitwick and the younger, grumpier choir master are the same character, but they are confirmed as the same character more than once, most obviously when McGonagall addresses him as 'Filius' in Deathly Hallows II.

Someone asked actor Warwick Davis on Twitter as mentioned on this article, though I couldn't find that tweet.

Could you possibly give us an insight as to why Flitwick's look was changed for the third HP movie?

So many of you have asked me the 'New look Flitwick' question, so I will answer it here, once and for all. When it came time to shoot 'Azkaban', there was no mention of 'Flitwick'' in the script. However, the producer still wanted me to be in the movie, so he asked if I would play the role of 'Choir Master'. Of course, I said 'yes'. When it came time to shoot 'Goblet of Fire', the director, Michael Newell said he liked the look of the choir master, and from that moment, the character became known as 'Flitwick'.

There was no role for Flitwick in the film adaptation of Harry Potter and the Prisoner of Azkaban; but he was offered a small part as the conductor of the Hogwarts chorus who appeared as a small man with brown hair and mustache.

Now coming to your questions.

Is this only limited to movies or the same in the books?

AFAIK, this change was limited to movies only.

Why did this change happen? Is the reason explained by J.K Rowling or the directors of the movies?

Apparently, Michael Newell liked the look of the choir master, and since then, the character became known as Flitwick.

To answer your question - a lot of things changed from the third movie onwards. A lot of details of the books was conveniently left out and the characters were not allowed to evolve as they should have. [No offense, I love the movies but I love the books more!]

As we can see from AJ's answer - the directors didn't have anything for the character of Filius Flitwick. Nonetheless, they wanted the actor to be a part of it. Hence, the makeover. I guess it was to get the actor noticed despite the less screentime. And I see it worked brilliantly - as we are here discussing the same.

And now the biggest thing - movies present a fair idea of Harry's journey. In no possible way they cover the story of the wizarding world. The books contain tons and tons of things that you would miss if you only watch the movies. A character appearance change is insignificant considering what all we have missed in the movies - Peeves, Deathday party, Dumbledore, Gaunts, Ghoul, ceiling in Luna's room, Barty Crouch Jr's story, Hermione's blue dress, Marauders and what not! So, I would suggest - do go read the books (or atleast skim through them or their extracts online).

Also, what happens in the movie is demand of the story to finish in a finite time. They will have some changes the director made. Also, when making a movie, there are some limitations and things you should do to make it presentable. Reading books lets your imagine anything. Lets not compare the two together.

Not the answer you're looking for? Browse other questions tagged character production harry-potter book-adaptation .

30
How is the relationship between the reader and the story affected by movies that are released prior to the completion of a book series?
14
How does the Basilisk roam around Hogwarts?
6
Is there a reason to use a two word phrase in the Harry Potter movie for the "Lumos" spell?
8
Why does Hermione not get any kind of punishment for casting magic outside Hogwarts?
5
Why did they allow different brooms to be used in Quidditch?
6
What did Voldemort look like before he killed the Potters?
8
Is this line in Harry Potter and the Sorcerer's Stone a reference to Fantastic Beasts and Where to Find Them?
24
Why did Albus Dumbledore's clothing change in the third movie?
8
In which ways did J.K. Rowling regulate the Harry Potter films?
7
Did some part of Voldemort's soul get stuck in Harry Potter's body in Sorcerer's Stone?