Previously there were plans about Baahubali 3 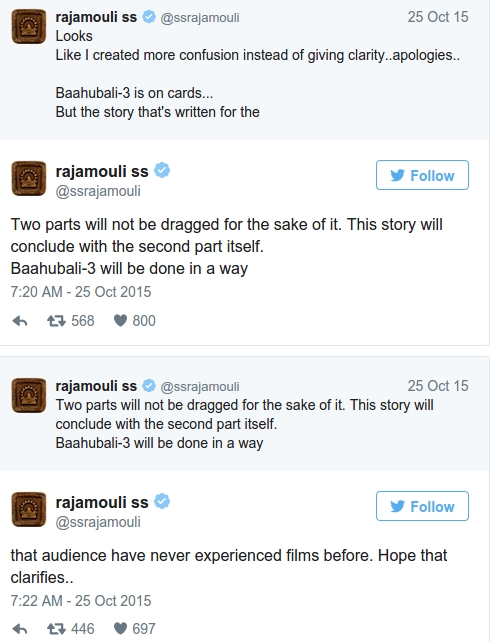 But now they are all shelved. From Indiatoday:

"We are done with the story of Baahubali, there cannot be a third part. But the world and the legacy of Baahubali will live on through a comic series and a TV series," Prabhas told PTI.

As Prabhas said the franchise will still continue with comic and a web series.

Not the answer you're looking for? Browse other questions tagged sequels baahubali-the-beginning baahubali-2-the-conclusion .

9
Which film has the most direct sequels/prequels?
11
Why did Kattappa kill Baahubali?
5
How much of the film Baahubali: The Beginning is inspired from actual history of India?
3
Are there any more movies announced after Fantastic Beasts?
8
What official sequels have there been to the 1939 Wizard of Oz movie?
1
What is the relation between "King Arthur: Legend of the Sword" and "Baahubali"?
3
How did Mahendra Baahubali gain such skills and power?
10
Was there ever a plan for more titles in the The Fugitive/US Marshals universe?
2
Does Baahubali explicitly indicate that the cow scene is CGI?