In the end of Watchmen, Rorschach begs Dr. Manhatten to kill him.

After watching the scene with the doctor in the prison, I am wonding if that little girl being murdered so heinously made him suicidal. He did say this:

What ever was left of Walter Kovacs died that night with that little girl.

At the end he begs Dr. Manhatten to kill him.

character watchmen
Share
Improve this question
edited May 6 '17 at 16:52

The movie, due to time limitations, does not show all the conversations between Rorschach and the psychiatrist. Rorschach dislikes him because he keeps calling him Walter Kovaks. The doctor tries to understand why Kovaks created Rorschach, thinking of it as just a "dissociative identity disorder", while Rorschach sees in a different way: until that moment (when he realized the girl was dead), he was "Kovaks pretending to be Rorschach". From that moment, only Rorschach existed. 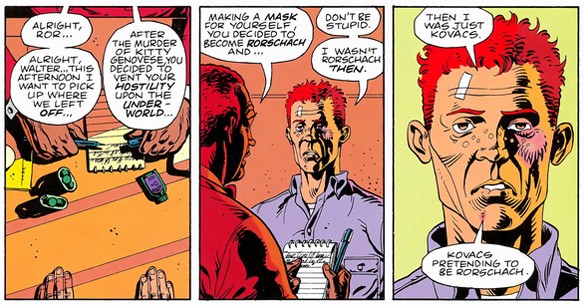 So he is just explaining that he does not relate to his old name anymore, he's Rorschach all the time. 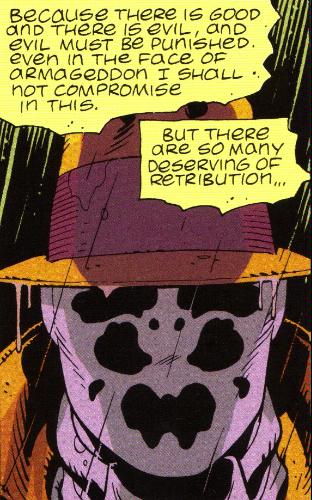 As @Paulie_D says, he's not suicidal, he is just in a dead end: He will never lie about the responsible of the killings even if that causes a Word War III. And he also knows that Dr. Manhattan has already made up his mind and he won't let Rorschach tell the truth, so he prefers to die rather than break his principles. 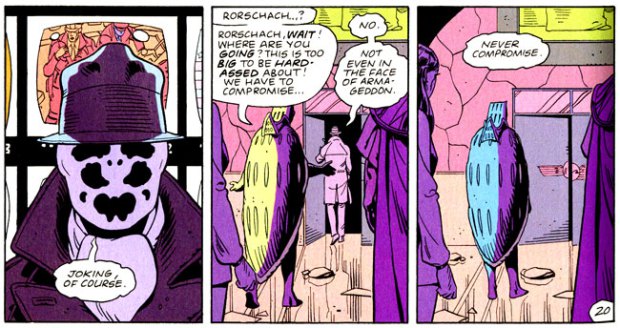 At the end he begs Dr. Manhatten to kill him.

Nite Owl is the rich, 60s toy/gadget part of the Dark Knight story, Rorschach is the early/late revenge driven version.

Rorschach is much more successful as a vigilante than Nite Owl as he has the strategic mind required, and Nite Owl acknowledges this: 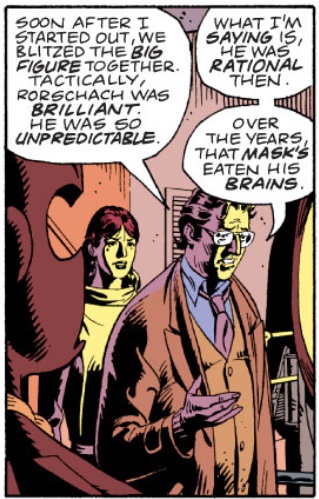 He also won't let a small thing like the end of the world stop the truth coming out:

Before Rorschach and Nite Owl head to Antarctica, he posts his journal to the "New Frontiersman" saying whatever happens from that point is down to Veidt, and is a plot. 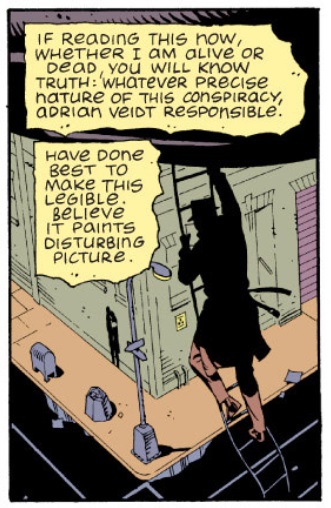 Once Veidt's plan is enacted Rorschach knows the others will remain silent, and will stop him from speaking in the name of peace.

He therefore decides to sacrifice himself, to distract the others from stopping his journal reaching the public (which is about to happen at the end of the story). His last message to the New Frontiersman is he expects to die. 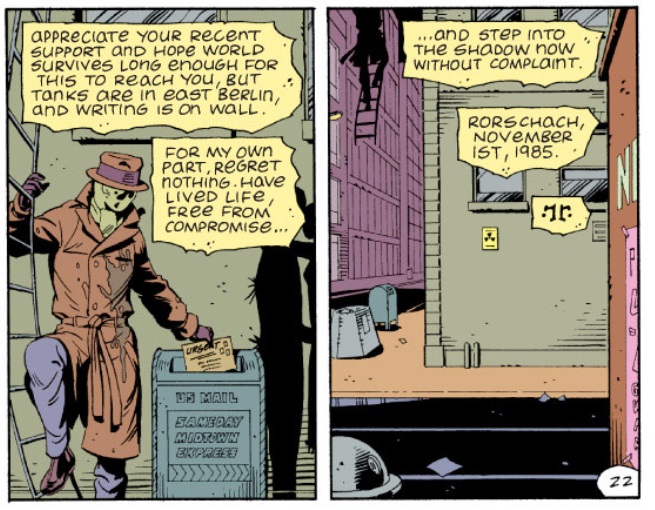 16
Why does Rorschach speak with such a growly voice?
6
Why was Amy postponing the inevitable and was it inevitable at all?
18
Was Martin Riggs' age ever established?
14
Is the 8th Doctor really half-human on his mother's side?
9
Does House kill himself?
4
Is Rorschach bulletproof?
5
Did Hannah Wells' have a 'story'?
4
Was Tywin Lannister involved in the murder plot?
2
Did Bruce's mother end up as the Joker?