Why would Watney write his own name?

Why would Watney write his name after he wrote a communication?

When Watney was asking how the launch to get him supplies he writes this below:

Being that he is the only one to be communicating with NASA, why would he write his name? Especially when all other communications don't show him doing this.

I would say habit.

A lot of older forms of communication would end with a Signature, to ensure that the recipient knew who had sent the communication. A lot of people still do this with emails, opting to type their name as a signature in the email, or having it automatically attached to the email, despite the email already being tagged as from them.

It can also serve as a declaration of end of message. Watney is on Mars, so there's a lot of things that could go wrong with the communication link, so having a clear end to a message can help the receiving end ensure that they got everything.

As for the discrepancy, I did a quick glance through the screenplay for the movie, and it looks like this is the only time they show, on screen, what Watney wrote using the Pathfinder without actually showing him write it. Every other communication with Watney is shown using different forms of communication or show him writing it.

I'm gonna answer based on something that is mentioned in the book.

On SOL 115, Martinez and Watney are texting/messaging via the system upgrade NASA provided which is linking rover's tools to Pathfinder's. And it is already known that there is no one else on Mars but Watney. Here is the conversation: 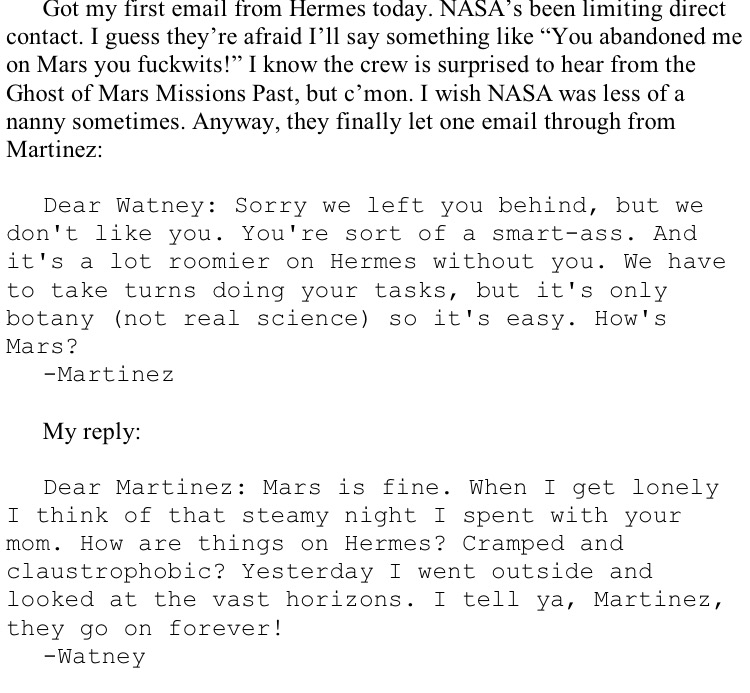 Martinez puts his name in order to make it clear that he is the one writing the message. As an answer, Watney does the same and puts his name as well.

I think this is more like a habitual thing rather than something systematic because there is no indication in the book about logging into Pathfinder's or rover's software in order to use it.

Even more, this purely based on my speculations, NASA or JPL wouldn't bother with a user logging algorithm for Pathfinder/Rover upgrade in the case of such urgency.

They also sent the specific code to link the two things to each other in hexadecimal deciphering. It would be an inconvenience for Watney in such a matter of life and death.

I have to say that I agree with both answers. Both mimicking the format of Martinez' message, and plain old habit (since it is the default message format) can be explanations in and of themselves.

But there is one more option: readability by a third party.

The simplest version of this is that Watney expects NASA superiors to read their message chain (nothing is private), and Watney therefore signs his name to his message to make the conversation easier to read.
(This is technically speaking a variation of the "habit" answer, since my answer inherently means that everything would be readable by third parties and therefore requires name signing for clarity's sake)

But I think there's slightly more to it.

There's also a different version of this claim, one that is somewhat supported by the movie/book. It has been a prominent plot point that NASA needs to take care of what they do and how they approach things, as anything they do is in the public spotlight.
They avoid looking at the Mars base because it might show Watney's body (and they cannot prevent such an image from leaking to the outside world and hurting their reputation), they avoid conversation topics when those topics should not be a matter of public record, ...

I am stealing the image from the top answer, as this snippet supports my claim:

Take note of the following passage:

NASA's been limiting direct contact. I guess they're afraid I'll say something like "You abandoned me on Mars you fuckwits!".

If the conversation was private, NASA would not have to worry about that. Watney infers from the limited contact that NASA is worried about the public perception of their communication.

We can't know for sure that that's why NASA was intentionally limiting contact. Maybe Watney assumed that was the reason for their radio silence, while in reality there was another reason (e.g. they took their time to provide a comprehensive message) and the messages would always have been completely private (therefore it doesn't matter what Watney says as no one is listening in).

Most likely, the third party (assumed by Watney to exist) would be the public; as Watney wouldn't expect NASA to be worried about what Watney says in conversations that are only readable by NASA personnel.

Not the answer you're looking for? Browse other questions tagged plot-explanation the-martian .

6
Why did Yusuf hesitate to show Cobb his dream chamber?
25
How did NASA figure out Mark was still alive?
9
Why didn't Jimmy get the permission to air his commercial?
5
Why does Bourne choose to reveal his location to Vosen?
34
Why didn't Mark Watney start digging downward?
6
How did NASA astronauts launch the pod from Mars, though they were at millions of Kilometres away?
4
Couldn't Light just have burned the page himself?
22
Why didn't Dr Strange use his sling-ring?
8
Why did Jules mention music band name here?