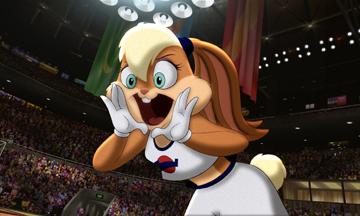 There is no evidence Bugs is gay and plenty of evidence to the contrary.

The sexual orientation of a fictional character is completely up to those who have creative control over the character. Since most of those people who created Bugs Bunny are now deceased having never claimed that the character was meant to be gay, a conclusive answer is not likely to ever be available. However, there is a great deal of evidence of what those creators intended for the character's sexual orientation and it overwhelmingly points toward heterosexual.

Cut to the last 10-15 seconds of this clip to see Bugs' encounter with Lauren Bacall...

Bugs was fooled (and attracted) by mechanical female rabbits on two occasions...

In Bewitched Bunny, the character Witch Hazel transforms into a female rabbit at the end and wins Bugs' affection.

On the other hand, Bugs' cross dressing was always done to fool an antagonist and kisses planted on the faces of male characters were always mocking and taunting, never depicted as a product of Bugs' desire.

While it is perhaps tempting for some people to try to make the case that a popular character from an era in which homosexuals were not represented in popular culture was secretly gay somehow, it is just wishful thinking. The overwhelming evidence points to the character being a heterosexual.