What was the crime of the second condemned man in the second episode?

Near the start of the second episode of The Handmaid's Tale, the bodies of two men are shown hanging by the "wall". As was astablished in the first episode, the drawing on the hoods that cover their heads tell of their "crime". One man has the star of david on the hood, probably meaning that his crime was being a Jew. The other person has a red X on the hood.

What crime does the red X signifies?

(In the first episode the signs for a priest, a doctor and a gay man are sown) 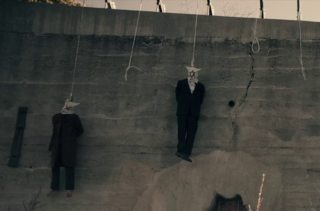 It could be a number of things, we know it's a crime to attempt to leave the country or stand up to the ruling government, so those could be the reason for it. Alternatively it could be due to being a murderer, (going by the red and it being an X). It's never explored, nor is it a reference to an explanation in the book.

Not the answer you're looking for? Browse other questions tagged plot-explanation the-handmaids-tale .

3
What crime is Alice Morgan charged with?
10
What was Dalton Russell's point in the movie Inside Man?
5
What happened to the second Blue Thunder prototype?
3
For which crime was Jogendra arrested?
1
What was the conversation in French, American Crime Season 2
3
Why did this happen to Eden in the episode "Postpartum" (season two)?
6
What happens in the house in episode 10 season 2?
3
What did June mean at the end of the Handmaids's Tale season 4 finale?