Is every Simpsons episode beginning unique?

I'm currently watching The Great Wife Hope which I know I have never seen before. However, while watching the opening couch gag, I was convinced I had seen the start before on a different episode. I have also seen the text Bart writes on the whiteboard in multiple episodes being the same.

According to the Couch gag wiki:

Generally, between one-half and two-thirds of the couch gags used in a season are new, while the remaining couch gags are repeats. Most couch gags are used at least twice, with a second occurrence usually in the same season as the first.

By going to the wiki you can clearly see in the list that some episodes repeat the Gag from other episodes:

One of the most used couch gags is the Circus line couch gag:

The Circus Line couch gag is the ninth couch gag of Season 4. It is the first elongated couch gag made for The Simpsons, and the most often used gag in the show.

The Simpsons get up off the couch and form a line with some dancers. The wall behind the couch moves away. This reveals a lot of other circus acts such as elephants, jugglers, magicians, trapeze artists and Santa's Little Helper walking on two legs. 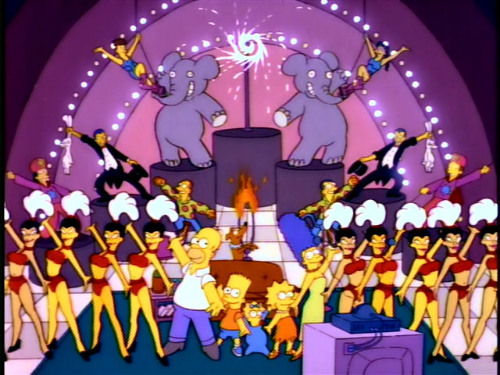