How to interpret these two lines in Annie Hall?

From Annie Hall, the scene where Alvy was having lunch with the Hall family (video here):

MOM HALL (Holding her wine glass) It's a nice ham this year, Mom.

Grammy Hall takes a sip of her wine and nods.

ALVY It is. (Smacking his lips) It's dynamite ham.

Grammy Hall stares down the table at Alvy; a look of utter dislike. Alvy tries not to notice.

MOM HALL (To Dad Hall, smoothing her hair) We went over to the swap meet. Annie, Gram and I. Got some nice picture frames. ANNIE We really had a good time.

Grammy continues to stare at Alvy; he is now dressed in the long black coat and hat of the Orthodox Jew, complete with mustache and beard.

MOM HALL (Lighting a cigarette and turning to Alvy) Ann tells us that you've been seeing a psychiatrist for fifteen years.

ALVY (Setting down his glass and coughing) Yes. I'm making excellent progress. Pretty soon when I lie down on his couch, I won't have to wear the lobster bib.

The two lines according to online sources are among the funniest lines in the movie, but I didn't get their point, perhaps because I'm not a native speaker.

I looked up the word "dynamite" and it seems to have a meaning an extremely impressive or exciting person or thing, so I would take this line as a compliment Alvy paid to Grammy Hall. Then why was it awkward?

As for the second, I actually had no clue what lobster bib alluded to. Does it have to do with the previous lobster scene?

Yes, these two bits of dialogue are clever jokes that follow one another. (And no, this has nothing to do with drooling or weeping.)

I'm sorry, but not only did the OP correctly assume the two jokes are connected, it seems the current answer didn't get them either. This is unsderstandable; some of Allen's humor is quite specific, in this instance mining (as he often does) a particular neurosis of a Jewish New Yorker. But here's what's actually going on in this scene:

The key to understanding this exchange is that ham (pork) and lobster (shellfish) are extremely non-Kosher foods. They're strictly forbidden ("treif") for Orthodox Jews or those simply keeping Kosher (which Alvy's Jewish family probably does). So when Annie's family praises grammy's ham, Alvy, who heard she hates Jews, is quick to chime in, casually calling it 'dynamite' as if he's a ham connoisseur. When nobody falls for that, Alvy then latches onto Annie's mom's question about seeing a psychiatrist to joke about his lobster addiction1, implying he's so into lobster that his shrink only now managed to wean him off wearing a lobster bib2. This joke bombs too, and now both mom and grammy are visibly annoyed by his obvious attempts to blend into their gentile Easter dinner.

It should be mentioned that there's also a class issue here: By pretending to appreciate dishes like fancy ham and lobster, Alvy is also desperate to fit into their WASP lifestyle (evident by the sports jacket he wore for the meal). The gap he tries to bridge here is further exemplified a few seconds later in the split screen scene, juxtaposing Annie's cold upper-class family dinner with Alvy's convivial lower-class ones.

The matter of Alvy trying to adapt to gentile customs by pretending to like these non-kosher dishes is discussed at length in this Jewish Chronicle article, and (even more at length) in the book Woody on Rye: Jewishness in the Films and Plays of Woody Allen (which adds that the red Jell-O prominently displayed next to grammy is distinctly a goy dessert as well).

1 Of course, we later see in the film just how alien lobsters really are to him.

2 It's worth noting there's a somewhat related joke in Seinfeld, a show very much inspired by Allen's humor: When George tries to exact revenge on a Jewish woman keeping Kosher in The Hamptons, he secretly puts lobster in her scrambled eggs and later reveals this fact by offering her a lobster bib.

I looked up the word "dynamite" and it seems to have a meaning an extremely impressive or exciting person or thing, so I would take this line as a compliment Alvy paid to Grammy Hall. Then why was it awkward?

What he says isn't the issue...she just disapproves of him on principle.

“You’re what Grammy Hall would call ‘a real Jew’.”

All Grammy can see when she looks at him is a Jew as evidenced by...

Grammy continues to stare at Alvy; he is now dressed in the long black coat and hat of the Orthodox Jew, complete with mustache and beard.

This is how she sees him...nothing else (or at least that's what Alvy thinks she thinks of him)

As for the second, I actually had no clue what lobster bib alluded to

No, nothing to do with the lobster scene.

This implies that when he sees the psychiatrist he turns into something of a drooling (or possibly just weeping) wreck so that he has to wear a bib to avoid making a mess. 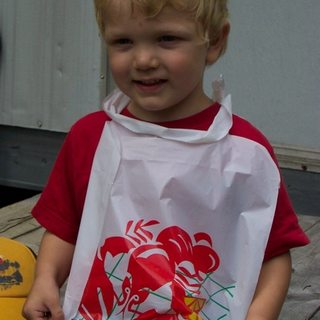 Not the answer you're looking for? Browse other questions tagged plot-explanation dialogue annie-hall .