I vaguely remember an animated film about the Titanic where a woman meets her true love on board. It was released around the start of the 2000's and was dubbed into English. I don't know what language it was originally but it was very clearly dubbed. I seem to recall it being not very good and when I ask my parents about it, they can't remember much either.

However, one thing I can see clearly is a rapping dog as the comedic side character along with a bunch of other animal sidekicks. Unfortunately I cannot recollect his name. So what I do know:

I'm revisiting movies from my childhood and was wondering if anyone could help. Thanks!

The movie is: Titanic: The Legend Goes On

which was released in September 2002. It was originally in Italian and was dubbed into English.

A poor girl named Angelica, [...] At the same time, an upper-class English man named William [...] Also boarding in the cargo hold are a group of animals, including a family of Yiddish mice, some geese, a dog named Fritz, a magpie named Hector, and a band of Mexican mice.

It stars Lisa Russo as Angelica and Mark Thompson-Ashworth as William who encounter true love on the ship, also "starring" a rapping dog: Fritz, and a variety of talking animals.

Finally, its IMDb rating is a solid 2.2/10 and has been described as

a failed Disney imitation that excels in bad taste.

I hope this is it and have fun watching it! (If you can)

Note: I found this with a Google search for "animated Titanic" and it was the first thing that came up

From wikipedia page of the film:

Titanic: The Legend Goes On (Italian: Titanic, mille e una storia or Titanic: La leggenda continua) is a 2000 Italian animated feature film about the sinking of the RMS Titanic, written and directed by Camillo Teti.

This movie begins on a White Star Line chartered boat train, boarding passengers to the RMS Titanic. A poor girl named Angelica, treated as a servant by her wicked stepmother and two stepsisters, dreams of finding both love and her missing mother, with only a blue locket as a clue to the mother's identity.

There are many talking animal characters in the film. So it matches the description you gave.

Below is the poster of the movie. 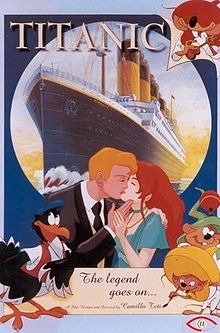