I'm thinking of a Simpsons episode where the plot is triggered by Bart obtaining a $1000 bill from Mr Burns.

Does anyone remember which episode it is? I've been wracking my brain for ages.

The episode is "The Regina Monologues" where Bart creates a museum for his found $1000 bill. This inspires the family to go to England for a holiday. 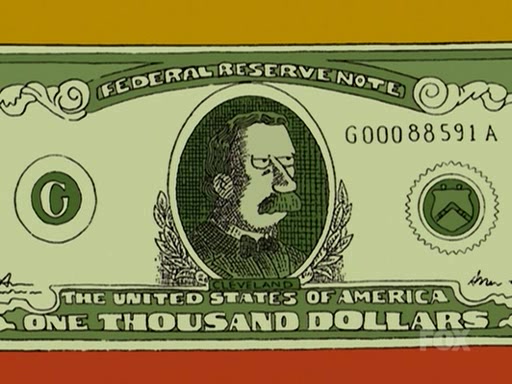 Mr. Burns loses a thousand-dollar bill that is quickly turned into the main display at the Museum of Modern Bart. After Burns shows up to reclaim his money, Bart realizes he still earned enough from charging admission to take the Simpsons to England. When they arrive, Marge begs Homer to make this an incident-free trip, which he actually succeeds at until he accidentally runs into the Queen. Now the only thing that will earn Homer a stay of execution is whether he can uncover the plot to poison her majesty. Meanwhile, Bart befriends Prince William. Guest stars Ian McKellan, J.K. Rowling, Jane Leeves, and Prime Minister Tony Blair.

Not the answer you're looking for? Browse other questions tagged identify-this-episode the-simpsons .