When looking at the evidence for this question (Do Star Trek characters wearing red shirts have the highest death rate on the original show?) it became apparent that the key colours of the uniforms are not the same in different series.

I'm not sure whether there is a definitive guide to what the colours are (perhaps an answer can clarify) but the key difference I noticed was that command personnel in Star Trek TOS wear a yellow shirt and ops (including security) wear red). This seems to be reversed in Star Trek TNG.

Is there any rationale for the changes?

When Roddenberry created the original series, he roughly based the uniform colors on 19th Century naval uniforms, which used various combinations of red, gold, and blue. In the original pilot, Captain Christopher Pike, along with the rest of the bridge crew, was given a gold shirt. Spock, however, was given a blue shirt to emphasize his role as Science Officer. Regular background crew were given the red uniforms. Over time, this developed further and the whole of StarFleet was officially categorized by three "departments":

This division/color match-up took a while to cement itself. For instance, Kirk can initially be seen in an avocado-green tunic, although it often appears to be a gold-like color on screen. This was originally to make him stand out against other gold-wearing crew. Due to the cameras & film of the time, the colors appeared differently on-screen than they did in person. Below, Kirk (in the green) appears gold, whereas the gold uniforms appear to be a beige color: 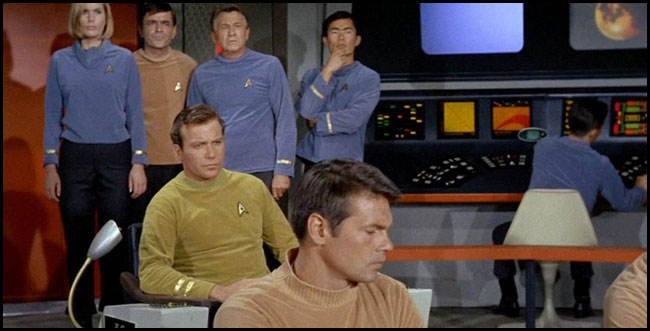 You'll also note that here - in the first aired episode - Scotty is wearing gold instead of his traditional red, and Sulu is wearing blue instead of his normal gold. Obviously, at this point, they were still working out who wore what color.

When making the transition to film, the division colors were dropped altogether due to the feeling that the bright colors wouldn't work well on the large screen. Instead, the first movie introduced white & gray duty uniforms. This decision proved unpopular with fans, however. With the second film, officers began wearing maroon jackets instead.

Years later when starting production on "Star Trek: The Next Generation", the division colors were back, but the red and gold were swapped as you noted. This occurred for two reasons:

Both problems were fixed by swapping the colors of the Command and Operations Divisions. And afterwards, in later shows, those are the combinations that stuck.

As well as the color changes between TOS and TNG, there were changes in uniforms for The Motion Picture, and again for the subsequent TOS crew movies (4 of which were produced before TNG).

If you look closely at the TOS movie uniforms, they have retained division colours - mostly visible on the turtle neck collars, but also the shoulder clasp. In particular, medical personnel had a green division colour (instead of blue from TOS).

As for in-universe rationale - times change. There is about 100 years between TOS and TNG. Military uniforms of most contemporary nations has changed dramatically in a similar time. In particular, many nations gave adopted a red beret for their special forces - following the British parachute division created in 40s.

So, it isn't surprising that some experimentation and changes have occurred over time in Star Trek.

Not the answer you're looking for? Browse other questions tagged plot-explanation star-trek .

72
Do Star Trek characters wearing red shirts have the highest death rate on the original show?
13
What is the significance of different color uniforms in Star Trek reboot series?

29
Why these credits for Star Trek Into Darkness?
16
Do I have to watch Star Trek TV and movie series before watching Star Trek Beyond?
12
If the Star Trek TNG future has no money, were there any stakes to the poker games the officers played?
8
Is there a canon explanation for certain holodeck differences between Star Trek shows?
0
Where was the Caretaker's farm scenes filmed for "Star Trek: Voyager"?
13
What is the significance of different color uniforms in Star Trek reboot series?
2
Filming locations for Star Trek IV: The Voyage Home
7
Are there any male actors written out of a "Star Trek" series?
81
Are there any indications why Roddenberry chose to make Star Trek a "battleship universe"?
6
Was there cigarette smoking on "Star Trek (The Original Series)"?