Thriller where woman has the memories of a murdered woman? [closed]

I borrowed this movie from the library on DVD sometime in the mid-2000s. Most likely 2005-2007. I'm not sure of the actual release date, but it felt contemporary, and I am fairly certain it could not have been older than the mid-1990s. American movie, in English. No memory whatsoever of the title - this was pulled somewhat randomly from the shelf.

A young girl and her father are driving at night through a small town/rural area. American - possibly the South. It is possible they attended a festival or carnival in the town.(?) Separately, a young man is driving very fast in the same area to get his wife medical attention - she was attacked and is bleeding. The two vehicles collide at an intersection. The girl's father and the man's wife die.

Fast forward - the girl is now a young woman, and she is working as an insurance adjuster(?) of some sort. She is asked to do some travel for work. It is mentioned that she almost never leaves the state (or enters the nearby state where she would be traveling to?), but she agrees to go anyway.

She goes to the town, and it is the same town from the beginning of the movie (although it is not clear if she remembers that or not). There is a scene outside a bar at this point where some guy is harassing her, but another man steps in and punches him in the throat (I remember this vividly). That ends up being the husband from before.

During her time in town, the young woman begins having more and more dreams/visions of a husband and wife, their home, and a beach-themed room or painting. It seems these are memories from the young wife who was killed. She becomes romantically involved with the widower. Eventually, these memories lead to the wife's murderer - an auto mechanic who still lives in town. I seem to remember the murder weapon being a long screwdriver or a similar tool. The young woman's life is threatened, but the murderer is brought to justice this time around.

It seemed that a big theme of the movie was how events were playing out the same way they had years earlier. The young woman looks somewhat like the murdered wife, and falls in love with the widower. The murderer is still in town and targets her. Possibly the same festival is going on.

This is The Return (2006), starring Sarah Michelle Gellar. IMDB 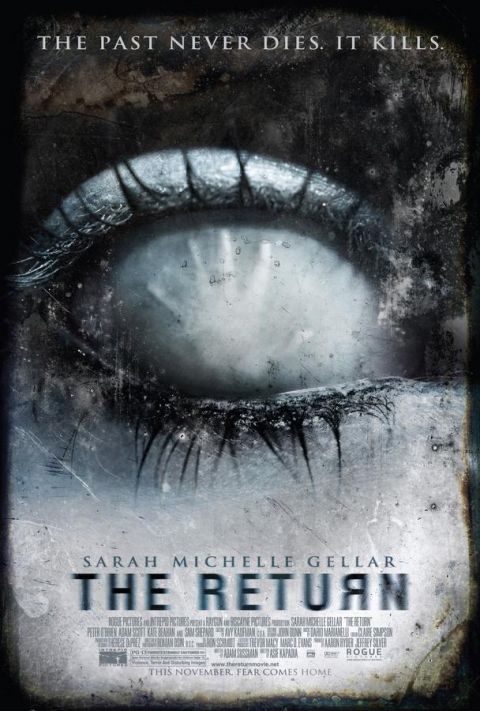 Joanna Mills (Sarah Michelle Gellar), a travelling rep for a trucking company, is dedicated to her successful career but something of a loner. Since the age of 11 she has been a troubled person, with episodes of self-mutilation and menacing visions. Normally she avoids returning to her native Texas, but agrees to a trip there to secure an important client. During the trip her visions, which take the form of memories of events not from her life, increase in intensity. She sees a strange face staring back at her in the mirror. Her truck radio plays Patsy Cline's "Sweet Dreams" no matter what station she selects. She stops at the scene of an accident that, on the following day, seems not to have happened. Joanna cuts herself in a bar restroom and is narrowly rescued by a friend. She visits her father, who observes that from age 11 she was "a different girl". The visions continue, becoming both more specific and more threatening, centering upon a menacing man she does not recognize and a bar she has never seen, but a picture of which is in one of her catalogs.

Drawn by the image to the Texas town where the bar is located, a place she has not been since childhood, Joanna meets a man named Terry Stahl, whose wife, Annie, was stalked, brutally assaulted, and left to die fifteen years before, a crime of which Terry was suspected but not convicted. Joanna continues to have visions of this crime and the events that led up to it, and to discover other links between Annie's life and hers. She meets the real killer and is led by what she has seen in her visions to recover the knife he used from its hiding place. She is then stalked, herself. She finds herself drawn into a repetition of the crime, but this time she stabs her assailant with the recovered knife, using the original weapon to avenge the original crime.

The story ends with the revelation that Annie, clinging to life as Terry drove her to the hospital after the original assault, died when his car crashed into one driven by Joanna's father, in which the eleven-year-old Joanna was a passenger. After momentary unconsciousness, the young Joanna seems to have survived the crash. A silent Joanna is seen reflecting on who she is and what has happened to her. She seems to reach an inner resolution of these questions.

An alternative ending included on the DVD release more straightforwardly supports the interpretation that Annie's soul has been placed in Joanna's body.

Michelle Gellar stars as Joanna Mills, a troubled young woman trying to come to grips with the disturbing visions she’s been suffering since childhood. We first see her as a young girl (impressive newcomer Darrian McClanahan) with a bruise on her forehead, visiting a carnival with her folksy father (Sam Shepard, the king of folksy) 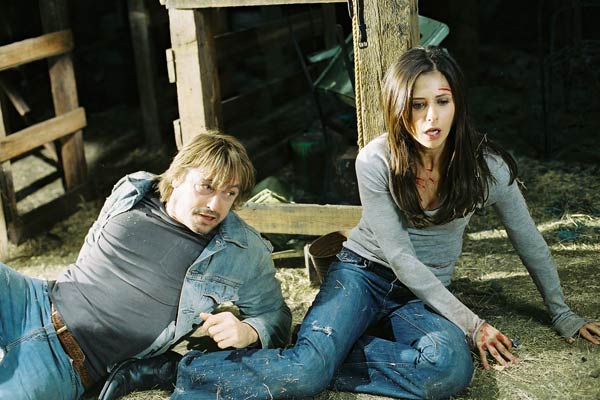