I wonder how the 70's hardware kept functioning well despite the electromagical force being strong enough to pull a modern airplane (either physically or due to failing its control systems) and break it into half. Is there any explanation given for this?

I can look past the smoke monsters and Jacobs but this thing is bothering me.

As far as I remember mainframe computer of Swan site was kept within a semi-spherical shaped structure made of metal i.e metal dome. 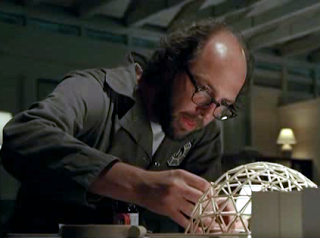 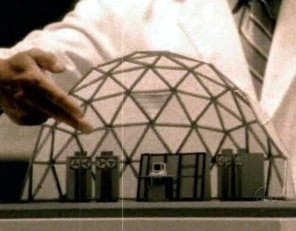 Ever heard of Faraday's Cage ? No it's not related to Daniel Faraday ☺

A Faraday cage or Faraday shield is an enclosure used to block electromagnetic fields. A Faraday shield may be formed by a continuous covering of conductive material or in the case of a Faraday cage, by a mesh of such materials. Faraday cages are named after the English scientist Michael Faraday, who invented them in 1836.

So the structure acted as a shield from electromagnetic field caused. But the plane being a giant metal can flying in air was pulled down as a whole.

Desmond runs to the computer and enters the Numbers. Desmond hears Kelvin singing and sees a bottle of booze on the floor. He opens a grate on the floor and finds Kelvin drunk under the Hatch holding a key dangling from a chain.]

[Desmond makes his way over to Kelvin who is lying next to a small alcove. We see a lid has been opened to reveal a place to insert the key and a sign that says Caution: System Termination.]

DESMOND: What is this?

INMAN: This is the only other way out, partner.

DESMOND: What are you talking about?

INMAN: Failsafe. Turn this key and this all goes away.

DESMOND: What's behind that wall, Kelvin? Huh? What was the incident?

INMAN: Electromagnetism, geologically unique. The incident—there was a leak. So now the charge builds up and every time we push the button it discharges it before it gets too big.

DESMOND: Why make us do it—push the button? If we, if we can just...

INMAN: [laughing and closing the lid] Here's the real question, Desmundo—do you have the courage to take your finger out of the dam and blow the whole thing up, instead?

The nature of the fail-safe and its repercussions are unclear. The discharge resulted in a blinding white glow covering the entire Island and the sky turning a violet color. The ground shook, as if an earthquake was occurring, and a painful buzzing sound was heard (like a blender, according to Hurley). The Swan itself apparently imploded, leaving nothing behind but a large crater in the ground and assorted debris. The event was powerful enough to lift or repel a number of objects, among them the heavy hatch door. It landed a considerable distance from its original location, narrowly missing Bernard and Claire at the beach camp. Locke, Desmond, and Eko survived the event, despite all three being inside the hatch at the time. ("Live Together, Die Alone") ("Further Instructions") In a deleted scene from "Exposé", Nikki reacted particularly drastically to the "purple sky," first by completely freaking out such Paulo had to calm her down, and subsequently by questioning her past behavior towards her fellow castaways. The event was subsequently referred to by the survivors variously as a "detonation," "implosion," "explosion," a "blowing up," or the "sky turning purple."

The Others later referred to it variously as an "anomaly," the "sky turning purple," or an "electromagnetic pulse." After the event, Tom said that the pulse shut down the Others's communications. Mikhail also said there was an electromagnetic pulse which knocked out the submarine's underwater beacon. ("Every Man for Himself") ("Not in Portland") ("Par Avion") It was later implied, however, that the communications disruption may have been unrelated to the discharge, as Ben had secretly ordered Greta and Bonnie at the Looking Glass station to jam all communications to and from the Island. ("Through the Looking Glass") Further evidence of this comes when Tom meets with Michael in New York weeks after the discharge, implying that Tom was still able to leave, and return to, the Island, and Ben is able to use the radio in his house to contact Michael on the freighter. ("Meet Kevin Johnson"). http://lostpedia.wikia.com/wiki/Discharge

So let me also try to explain my interpretation of LOST to give you an answer as to why one wouldn't get all the answers and what the Island is.

But in spiritual terms or metaphysical terms, it is "Life, Death, and Rebirth" with the flash sidways being "death" (astral plane interpreting the running of time or life), and with a "heart" (Heart of the Island ---> Ancient Egyptian concept where the heart is the door way to "collective conscious" ---> collective conscious = running on some kind of predetermined/controlled universe(s) or working with some kind of advance equation: ie: Vanzetti Equation) where people glimpse the next time line (2004) that they had made, but they have to remember the past in order to see what they made (a reality where they no longer have to deal with the Island and where they are directly in each other's lives more immediately) before they can "move onto it". The FS basically works with Alice in Wonderland-backwards dream-logic. "It ends only once, everything before that is just progress" = as long as there is an Island with it's exotic matter/light water in tact, there will always be infinite life times/timelines living through the Island as a way for "spiritual progress". So when Ben doesn't chose to move on, it;s because he doesn't believe he deserves or has earned (karma) the upcoming life he *could have--he still "has work to do" (karma) and needs to deal with the Island again...

So the fail safe may work simply because in part "it has to" (kind of like a vacuum that sucks cancels the electromagnetic field out (aka Faraday's Cage), so that the fabric of universe does not break down and it also does so by networking certain people (Desmond) through different versions of the time line. Desmond in Flashes Before Your Eyes, goes back to an earlier time, where he now has knowledge of things, he didn't before and it appears he may have "rewritten" over part of the timeline, since the Hawking we come to know "matches" what he experienced. In The Constant he consciously time travels back to another 1996, one that would "match" an event he needs for survival--one where Penny would call him on Christmas--but she never confrims that she did this because she remembers talking to him--she just calls--so we could suppose that in many timelines, she often calls...

However the Swan also works in tangent or is a similitude to The Orchid Station that also has "discharge" properties; the Orchid has "the frozen wheel" (cold fusion?). It too also can allow to move people through space and time, whether it spits the wheel-turner out somewhen in the same timeline at "the exist" in Tunisia, or if causes the Islanders' to "skip through" time (seemingly in the same timeline--However John Locke's experience from Follow the Leader in conjunction with Because You Left shows us a 2007 where John is alive, dead, and being impersonated by the smoke monster at the same time! It implies a casualty loop that has to work by networking futures that have already exited and come to "repeat" close enough to make this loop or time-fold possible---and Then, also, Daniel Faraday contacts Desmond in the past and the information "uploads" to his current conscious--again showing us the Island works through timeline(s) networking to preserve the fabric of reality...

LOST, as it name suggests was about the experience of a group of people spiritually progress without them ever really knowing what the Island does or how the Island works, because the show wanted to make a point that experience may be more important than fully understanding the nature of a reality by having spiritual progress be the ultimate motive for said experience. So if you are playing with multiple universe or iterations of timelines in relation to being 'lost', it stands to reason that you would have to view several to be able to figure out the origins of things, when a constant changes to a variation, etc.

Not the answer you're looking for? Browse other questions tagged lost .

43
What was really behind the mysterious number sequence in Lost?
4
'Lost' follow along resources?
9
Lost purgatory theory
11
What is the reason some of the characters in Lost are named after enlightenment thinker?
5
What was the letter written by Charlie before he died in Lost?
11
Significance of Charlie's tattoo in the Lost series
3
Is the "Oh oh oh ah oh" chanting before a Lost episode the Lost theme song, or an ABC song?
4
When is the final explanation in Lost revealed?
8
Are back stories in Lost important?
9
Was the Island in LOST In another dimension?