What movie about a virtual reality game is this? [closed]

Per wikipedia, it had a budget of $15 million dollars (US).

Per the wikipedia article's plot description:

Antenna Research's Allegra Geller (Jennifer Jason Leigh), the world's preeminent game designer, is testing her latest virtual reality game, eXistenZ, with a focus group at a seminar. She is shot in the shoulder by an assassin named Noel Dichter (Kris Lemche) with an organic pistol, which is undetectable by security. As Dichter is gunned down by the security team, security guard (and marketing trainee) Ted Pikul (Jude Law) rushes to Geller and escorts her outside. 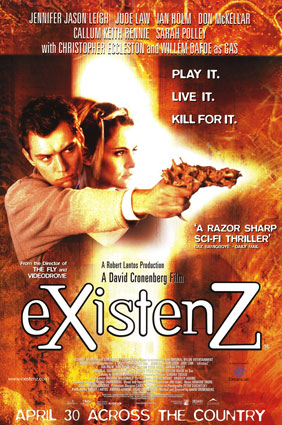