I am trying to work out the name of a film. Can anyone help?

I would classify this film as a thriller. It is set in a chapel/house with a cemetery and based around 4 characters. 3 men and a woman.

A guy moves in with this old man and woman and he ends up sleeping with her. The guy is a chauffeur for a guy with a pink car. I remember him going out in it and returning in it drunk even though he was instructed not to do so by the man whom he was chauffeuring for.

Later towards the end the old man gets killed. There is a fake wedding to the woman also. And at the end they agree to share her for a certain amount of months each.

A strange film I know but for life can't remember the name. Any ideas please?

It was in colour, English and a US production. It was a film before the 1990s but that is all I can remember.

Entertaining Mr Sloane is a 1970 British black comedy film directed by Douglas Hickox. The screenplay by Clive Exton is based on the 1964 play of the same title by Joe Orton.

Kath is a lonely middle-aged woman living in the London suburbs with her ageing father Kemp, referred to as DaDa or the DaDa. When she meets the attractive Sloane sunbathing on a tombstone in the cemetery near her home, she invites him to become a lodger. Soon after he accepts her offer, Kath seduces him. Her closeted brother Ed makes him the chauffeur (complete with a titillating tight leather uniform) of his pink 1959 Pontiac Parisienne convertible. 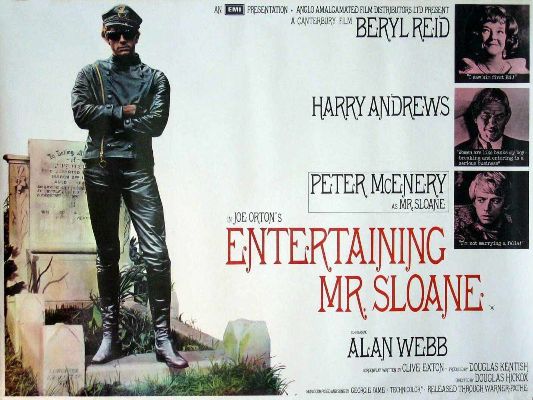