What is the movie playing on TV on Logan and what is its connection to the film?

In Logan, a movie is shown on TV. It is an old western, nearly 80 years old. They quote some lines of the movie, something like:

Now you run on home to your mother, and tell her... tell her everything's all right. And there aren't any guns in the valley.

What movie is this and what is its connection to Logan?

Confirmed on thrillist.com too

And the full dialogue was:

Shane: I gotta be going one.

Shane: A man has to be what he is, Joey. Can't break the mould. I tried it and it didn't work for me.

Joey: We want you, Shane.

And here is video for that specific scene:

Mangold mentioned the 1953 Western Shane, the story of a tired gunfighter (Alan Ladd) who falls in with a boy and his family. That movie would influence the core relationship between Logan and Laura, who are both distrustful of the other but find common ground.

And if it was Jackman’s goodbye to Logan, Mangold thought it should definitely explore the hero’s biggest fear: “Is he frightened of villains? No. Aliens? No. Galactic destruction? No. His own demise? No. But he is scared of love.”

Even Mangold has a personal liking for the film, which is clear from his old tweet. 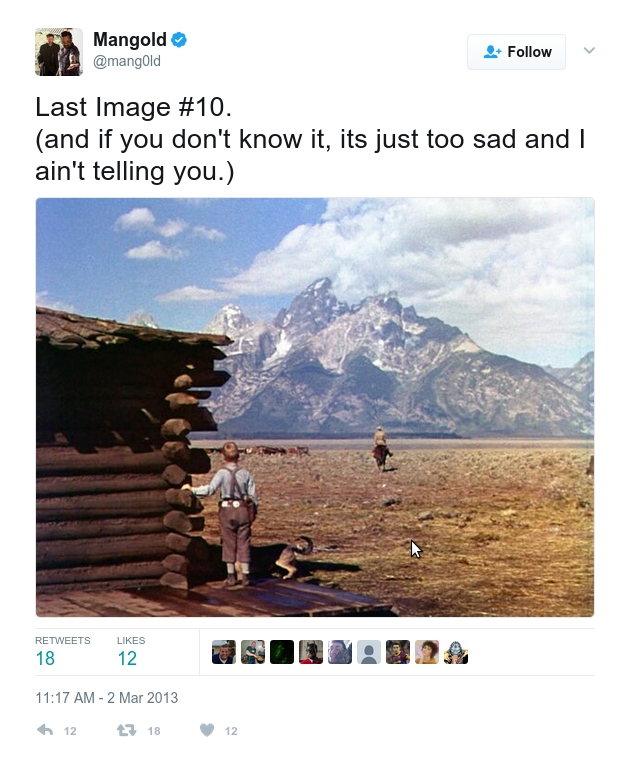 As others have answered, the movie in question is "Shane".

I believe one connection to the film is that in a lot of ways, "Logan" is more of a western than a superhero film. It has many of the standard elements you saw in an old western, such as revenge, redemption, protection of innocents against an invading force. Logan doesn't want to be a violent man but is forced to by his circumstances. He is basically the "nameless hero" of the classic western. Heck, toss out the adamantium and set back the clock 200 years, and it IS a western. Adding the clip from "Shane" was the director wink-and-a-smile acknowledging this.

Not the answer you're looking for? Browse other questions tagged analysis x-men-cinematic-universe reference logan .

4
What was the point of the interplay between Richard Riddick and Dahl in Riddick?
6
Why did Xavier not contact the US and Russian military telepathically?
7
Is "Logan" the last movie with Hugh Jackman as Wolverine?
17
What happened to the X-Men in Logan?
5
Reason behind the title "Logan"
9
What is happening to Logan?
14
Can someone explain the "returning to the past" motif in Logan?