Why does snow appear to go up in movies?

I have noticed in many movies, including Gladiator and Kingdom of Heaven, that when snow is shown it often appears to behave differently to snow in real life going sideways or upwards.

This can be seen in the clip below from Kingdom of Heaven in the first battle scene, here:

I always find it jarring and pulls you out of the story somewhat.

Why does snow in movies have this behaviour?

Is it because it is fake snow which is lighter than normal snow? Is it to do with the angle it's inserted into the scene from? Or is it some other reason?

'Movie snow' is made of several different things, each having a different weight & different purpose.

If they'd really wanted it to fall straight downwards, they'd have used something heavier.

...and I only just realised, that's the company who did the snow for Gladiator!
See the page on Snow Sticks

After comments - I feel it doesn't change the premise of the question whether it's light snow or actually ash in the first-mentioned Gladiator clip. There are plenty of occasions when show flurries in all directions, unless the weather is completely calm and still.
Different artificial snow weights and/or large fans out of shot can change the appearance on-screen to be whatever the director requires.

The premise of the question is false for a couple reasons:

I've seen light snow, such as may be depicted here, be blown around up, down and sideways in a light breeze so it doesn't look unusual at all to me.

Snowflakes are very light...so it wouldn't be unusual for them to be caught by the wind.

As for the specific scene, in fact, what we might be seeing is ash and not snow (although snow is more likely) ....either way both are light enough to be caught by the wind.

There's no reference to snow in the screenplay so it's possible it was actual snow that started falling while they were filming. 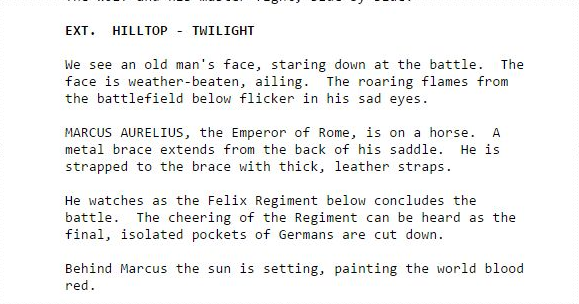 It's quite possible this was a deliberate effect to give the viewer the feeling that there are a lot of fast moving, deadly things moving around (creating a whirlwind). Sometimes it's normal. At other times, it appears to be for dramatic effect to offset an otherwise boring scene.

At time 3:25, we see an outright melee. The snow is going every which way to show that things and people are moving around quickly.

At time 3:35, we see a quieter part of the battle (only one horse running in the background while a soldier falls). The snow is "normal".

At time 4:53, we see the emperor being dramatic with expression, but nothing else is going on. The snow moves sideways, but you also clearly see two flags in the background being blown about by the wind. The snow moves sideways because of the wind -- and too add dramatic effect to the character, showing the conflict he feels in his soul. What's not natural here is that his hood is not being ruffled by the wind to match the snow and flags.

Of note: Sometimes we do really perceive some things appearing to move backwards with the Wagon Wheel effect. (Doesn't apply here.)

Just a few weeks ago snow (not ash) was doing this outside my window. There was no breeze to speak of. That did not matter. The air around us is nearly constantly in turmoil on many spatial scales. From moment to moment laminar flow and turbulent flow may switch their dominance, typical eddy size distribution may vary, and velocity may vary, but the motion and turbulence affects all spatial scales to one degree or another. Look at how dust in a bedroom sunbeam is moving around, without aid of outside air current. So, yes, that could happen. If you have ultralight particles, they will move pretty much 100.0% in any random direction, without a dominant downward direction being perceptible.

There is one very simple explanation for the effect - it is the same thing that causes tires to appear to be rotating backward in car commercials. It comes down to the sampling rate of the image. All movies are created by taking a sequence of frames that are then assembled together to form a movie.

Imagine shooting a turning wheel. After each frame (at say 60 frames per second), the wheel turns by some amount. If the amount the wheel turns causes the next spoke to be slightly behind where the first shot spoke was, the wheel will appear to be rotating backward.

Since snow (or ash or rain) may fall nearly uniformly, the same effect can be observed when creating a movie, that is, the particle from one frame has moved downward just enough to appear ABOVE a similar particle in the previous frame. If that happens enough, the particles will APPEAR to be moving upward.

Another example illustrating the same concept is chasing lights on a marquee (sign). The lights appear to be spinning around, but in fact, all that is really happening is that adjacent lights are turning on and off giving the appearance of motion.

Finally, the reader can conduct their own experiment with a fan illuminated by a stroboscope. Adjust the speed of the strobe (or fan) until the fan appears to either spin forward, backward or to stand still. The motion of the fan never changed, only the way the images were captured.

NOTE: The particular scene in the question appears to be exactly what others have said... snow drifting upward and sideways due to air currents.

50
How do they film movies that take place in a single season?

14
What is the science behind making actors appear different?
14
Why were movies in the past produced at a faster pace than modern movies?
6
Why does the Underworld team release their movies exactly with 3 years gaps?
43
Why do old movies sound like old movies?
20
Why do movies in theaters not have recaps?
5
Why is the break-even point for movies usually twice the budget?
9
Does NASA make any money from space documentaries and movies?