How did Hamilton figure out the pattern?

In Hell or High Water Texas Ranger Hamilton decides to observe a branch of the Texas Midlands in the city of Coleman, expecting the Howards to rob this soon. And indeed this was the plan.

Due to another small branch that was closed that morning Tanner Howard spontaneously decides to rob the branch in the city of Post instead of that in Coleman. At the very same morning Hamilton explains to his partner Parker that he figured out the pattern of branches to rob that the Howards use - leading him to the conclusion that they will rob Post that day, rushing there.

But exactly that was not the plan. The branch in Post does not fit into the pattern of branches. It was an ad hoc decision that Toby Howard did not agree with.

What did I miss? How did Hamilton figure out the correct branch?

They key to keeping on track with the plot to do with the banks is in just a few conversations. Two being at around the same time before Post is robbed and the other conversation being relatively near the start of the movie.

Conversation 1. After Alberto Parker informs Marcus Hamilton about the bank robberies that happen at the start of the film, Marcus and Alberto head to the bank where the manager was hit in the nose, whilst at this branch: Marcus looks at the scene thinks of the amounts taken so far and states in his opinion that the bank robbers are trying to raise a certain amount and it will take a few banks to get there. “They’re trying to raise a certain amount, that's my guess” - Marcus Hamilton

Conversation 2. After Tanner Howard and Toby Howard get to the bank branch that has been closed down that they were not aware of, they drive to rob another small branch in Coleman. On the way Tanner gets Toby to pull over and explains why hitting Coleman is a waste of time.

Tanner goes on to explain things and ultimately convinces Toby to head to post, one bank and scrap the plan of two banks, Coleman and the closed branch.

Conversation 3. We know this conversation happens in Coleman as there is a scene out the front of the T-bone steak cafe that says Coleman Hotel.

The explanation is in the form of a one sided conversation that ultimately explains the closed branch. Closed. Marcus has deduced that with Coleman (where he is in wait) combined with the no cash (of course) from the closed branch the only other branch aside from the very large one (which he knows they won't hit as it is explained earlier about the amounts of cash being taken) is Post.

At about an hour and four minutes into the movie, Texas Ranger Marcus Hamilton (Jeff Bridges) explicitly states his reasoning to his partner, Alberto Parker (Gil Birmingham):

He deduces the next likely location while considering:

Because he realizes the robbery in Vernon was an aberration, Hamilton is able to see the pattern. As he states earlier in the film, he is confident that they are not just some meth heads (like Parker suggests while they're driving to investigate the Vernon robbery) and instead these robbers have a goal and a plan how to get it.

Hamilton: Well, these boys, they ain't done yet, I'll tell you that.

Hamilton: Well, they're patient. They're just sticking to the drawers, not taking the hundreds - that's the banks money, we can trace that. They're trying to raise a certain amount, that's my guess. It's gonna take a few banks to get there.

He doesn't need to know the goal, and figures that the plan is to rob Texas Midlands Banks in small towns. He then considers the seven Texas Midland Banks in the area and (excluding Coleman and Ft. Worth) the choice is between Post or Childress. He deduces that the one with the smallest population is the obvious next choice.

In the film's narrative, knowing the area isn't required for accepting the idea that Hamilton knows what he's doing (despite Parker's "reluctance" to oblige his deductions), but looking at a map and knowing the town populations might help with understanding Hamilton's thinking: 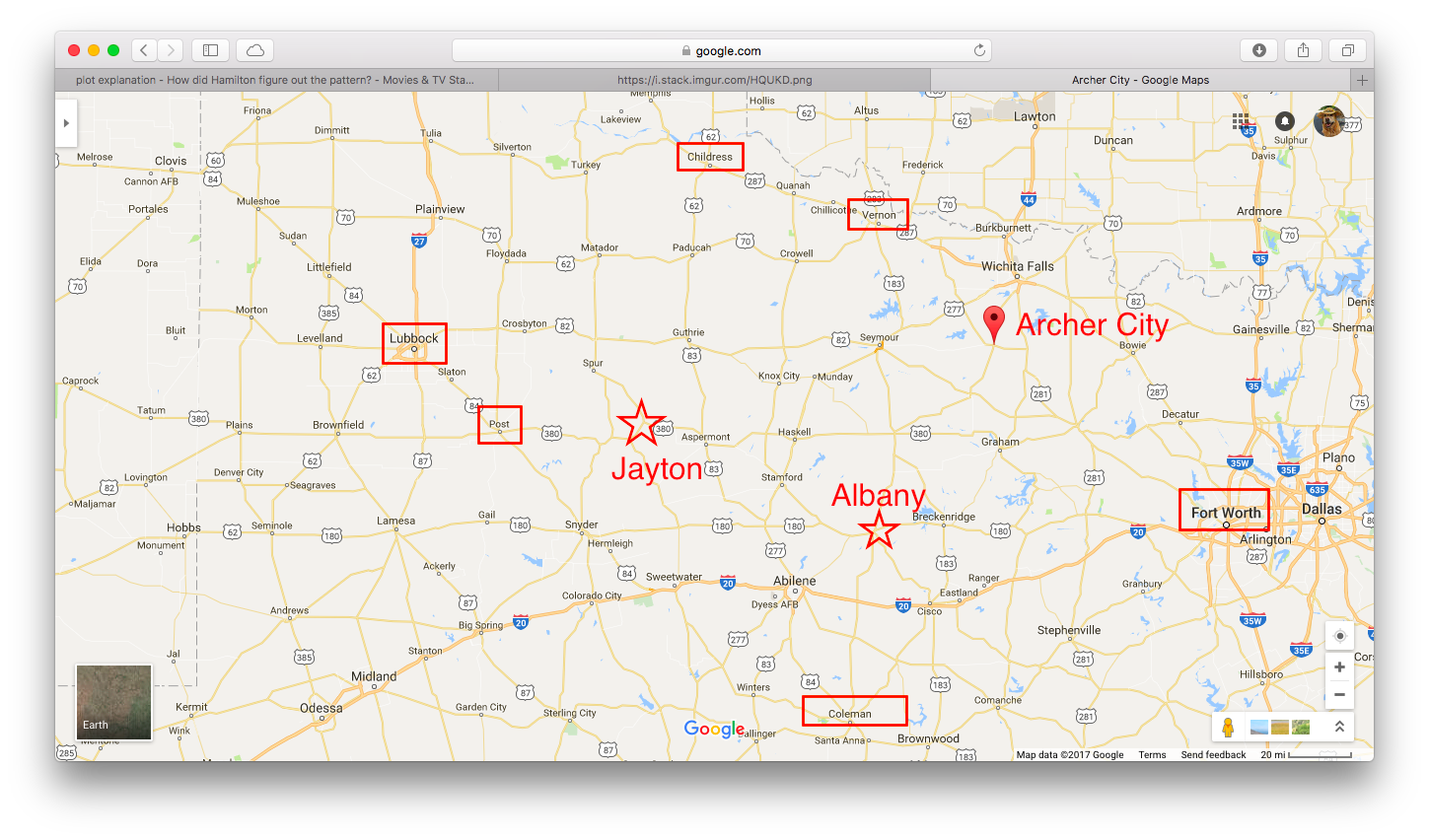 Hamilton: I think I got this figured. The first two banks, they were Texas Midlands Banks. Alright, there's seven branches altogether. The main branch is in Fort Worth. They're not gonna mess with that. Alright, they hit the branch in Albany, they hit the one in Archer City, then there's the one here.

Parker: Which they did not hit

H: That's my point: Jayton is closed. That just leaves Post. They aren't gonna mess with a bank in Childress. That's a fairly decent-sized town.

P: Branch in Vernon's wasn't Midlands and they hit that.

Post is "the only branch that fits the bill" because Hamilton has figured out that they are focusing on small Texas Midlands Banks by presuming the Vernon robbery was a fluke.

Not the answer you're looking for? Browse other questions tagged plot-explanation hell-or-high-water .

3
How did Harris throw Mahoney out?
14
How did Murph figure it out?
25
How did NASA figure out Mark was still alive?
6
How did the plan work out at the end?
3
How did Efraim cut out Henry?
2
How did Janine figure out that Holly and Messer had sex?
5
How did Poirot figure out one person's identity on the Orient Express?
1
How did Eddie figure out the will was on Roger's love letter?