Did Rise of the Planet of the Apes take footage from the 1968 movie?

Now if I remember that scene correctly, the TV newscast actually shows footage of the crew sitting inside the Icarus spaceship. So my question is, did they take footage from the 1968 movie, or did they film a new scene for that?

The reason I ask is that it seems fairly obvious that rebooted Planet of the Apes film series is intended to lead up to a remake of the 1968 movie, after they finish showing how the apes took over the world. So if they did film a new scene of astronauts aboard the Icarus, I think the actors they showed in that scene would be the intended stars of that remake.

EDIT: In this interview director has expressed interest in making a movie "retelling" the events of the 1968 movie, although he doesn't call it a remake:

To me the idea is that the 1968 films stands as trajectory in that, what is so exciting is that the world of that film is so different from where things started in RISE, and the way they are in DAWN and now will be in the next film. There is a huge distance to cover between here and there that is all about Caesar and future generations, and how this world has transformed into that world, and the struggle that they’ll have to go through and how we create the world that we know from that. I think once you’ve gone through all of those chapters, you’ve gotten all the richness of those stories, you could very well find yourself going into that story again, but I think it would be from a new perspective. The idea would never be to remake the ’68 film. There might be some of those events from another perspective, and obviously to also see them as events that grew out of everything that we’ve been watching from this new iteration. They wouldn’t be exactly the same either. So if, and when, we ever get there, which I think is an exciting notion, it would definitely not be a remake but it would be sort of a re-telling of those events from a new perspective. And the events themselves would probably be a bit different since they will have grown out of these films.

EDIT 2: For more evidence, see this EW article, which says that Nova, the heroine of the 1968 movie, will appear as a little girl in the upcoming movie War for the Planet of the Apes:

So clearly they're building up to the 1968 movie.

The footage is from Apollo 8, the crew depicted are Frank Borman and Jim Lovell: 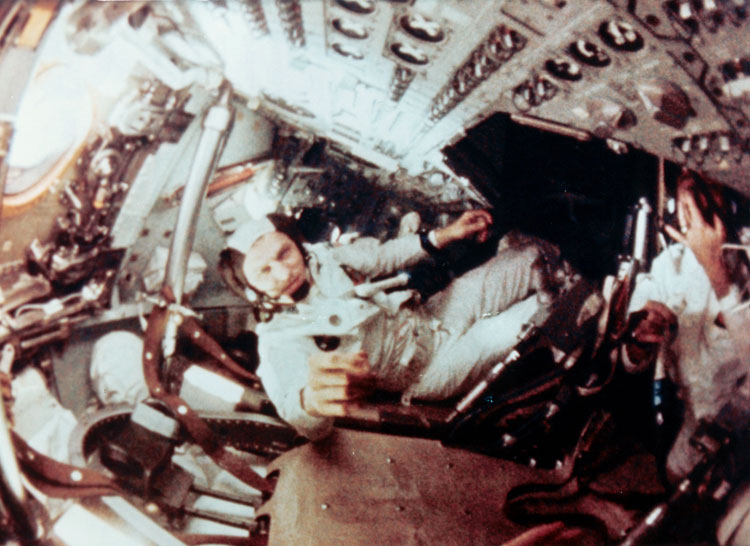 I also found a link to a stock footage film that the above image is from, which includes the still shot from the question (I will look for a NASA source if possible): http://footage.framepool.com/en/shot/201266716-frank-borman-spaceman-jim-lovell-apollo-8-weightlessness

EDIT: Not able to find a NASA source for the video, but a screen cap from the above link follows. This is the "same" as in the movie newscast, perhaps a few frames away (edited with a "polar coordinate filter" and cropped): 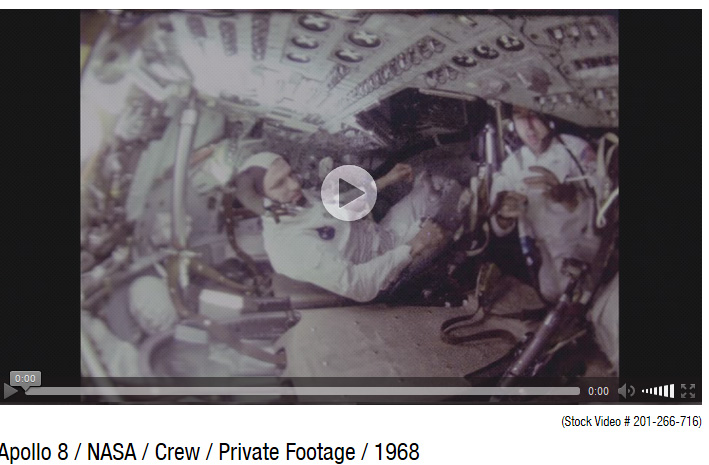 In addition to JohnnyBones answer you can see that the two interiors are quite different.

Frankly, I doubt if the actually specifically filmed new footage at all. It looks like library footage of a standard launch and in-orbit cabin footage. The footage of the astronauts is so low quality they are, for all intents and purposes, unidentifiable.

I don't see how they can build up to the 1968 movie, when the crew in the 1968 movie left Earth before the events of Rise of the Planet of the Apes took place. One thing that has always frustrated fans is the shoddy timeline and the inability to create a logical one. 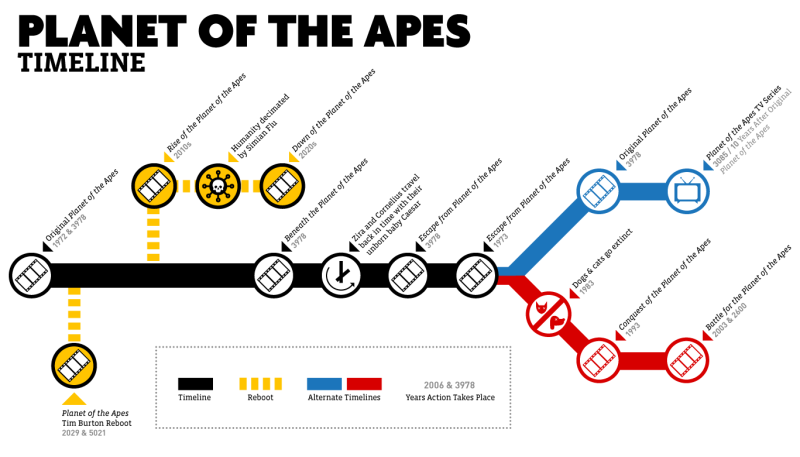 Even the comic book series couldn't really fold it back together without trying to re-establish canon. So, any future Apes movie has to really bridge the gap between where Dawn ended and where the crew of the unnamed spaceship (it was never named until the DVD release of the original, which included a featurette that referred to the craft as "Liberty 1") landed in the lake.

Getting back to your original question, the footage was not recycled from the original, it was all new footage.